Following Saturday’s matches I’ve updated my scatter graphics to see how each of the four divisions below the Premier League are looking. For each division there are three graphics – the first shows overall dominance, the second attacking performance and the third defensive performance. All are based on shot data and give a high-level view of how each club is doing relative to the others, with the axes centred on the divisional average.

Here we look at the Conference, starting with each club’s overall dominance. Shots taken are on the horizontal and shots faced are on the vertical, so bottom right is good while top left is bad:

Grimsby are comfortably out-shooting the rest of the division – as leaders Barnet discovered to their cost today – but seven other sides have been better at restricting their opponents’ efforts, chief among them Halifax. Altrincham and Torquay, who met today, have seen plenty of action at both ends of the pitch, while poor Alfreton are creating the fewest chances and allowing the most.

Now let’s look at attacking. The horizontal axis stays the same, but now we have the average number of shots needed to score each goal on the vertical axis: 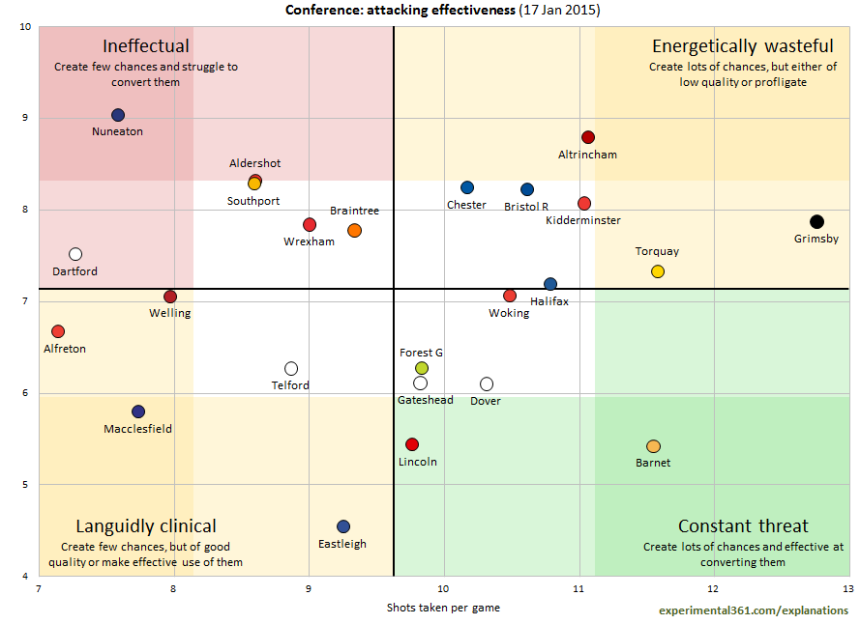 Leaders Barnet have been a lot more efficient in front of goal than Grimsby, but sharpest of all are newly-promoted and high-flying Eastleigh who’ve needed just 4.5 shots on average to score each goal. The most wasteful side in the division, Nuneaton, are also creating among the fewest chances, which does not bode well for their survival.

Now let’s look at the defensive picture – basically replace the word “taken” for “faced” on both axes. Now top left is good – facing fewer shots and able to soak up more per goal conceded – and bottom right is bad:

Bristol Rovers‘ recent rise to second owes much to operating the division’s most resilient defence, edging out Macclesfield‘s and allowing significantly fewer attempts. Grimsby also deserve an honourable mention – they’re more than just an impressive attack. Telford‘s defence is the division’s most porous, able to withstand just over 5 shots for each goal they’ve conceded.