Ahead of the busy festive schedule, I thought that it was a good time to take another look at how each of the Premier League clubs are performing using my scatter graphics. These are explained here if you haven’t seen them before. 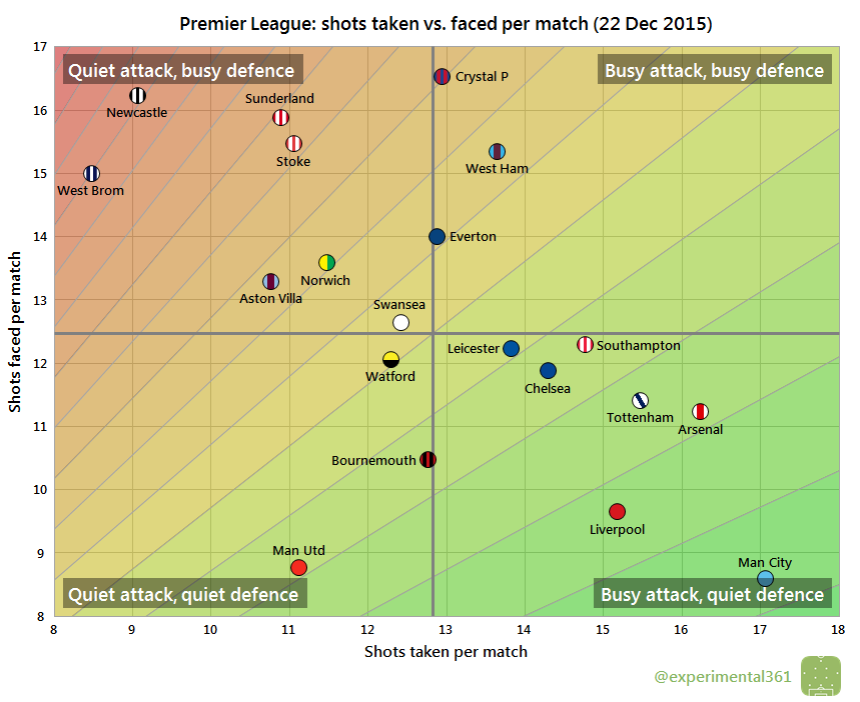 The two Manchester clubs have allowed almost identically few shots against them this season, but they’re poles apart up front. Man City have taken around six additional shots per match than Man Utd, with only five clubs troubling goalkeepers less frequently than the latter.

Despite their disappointing season, Liverpool have still tended to dominate matches this season, so perhaps there isn’t too much for Jurgen Klopp to fix.

Newcastle and West Brom look to have spent much of the season on the back foot this season, so it will be interesting to see whether they can remain clear of the relegation battle.

They may be flying high in sixth, but Crystal Palace have allowed more shots at their goal than anyone else. We’ll see how they’ve managed to stay in the top half a bit later on. 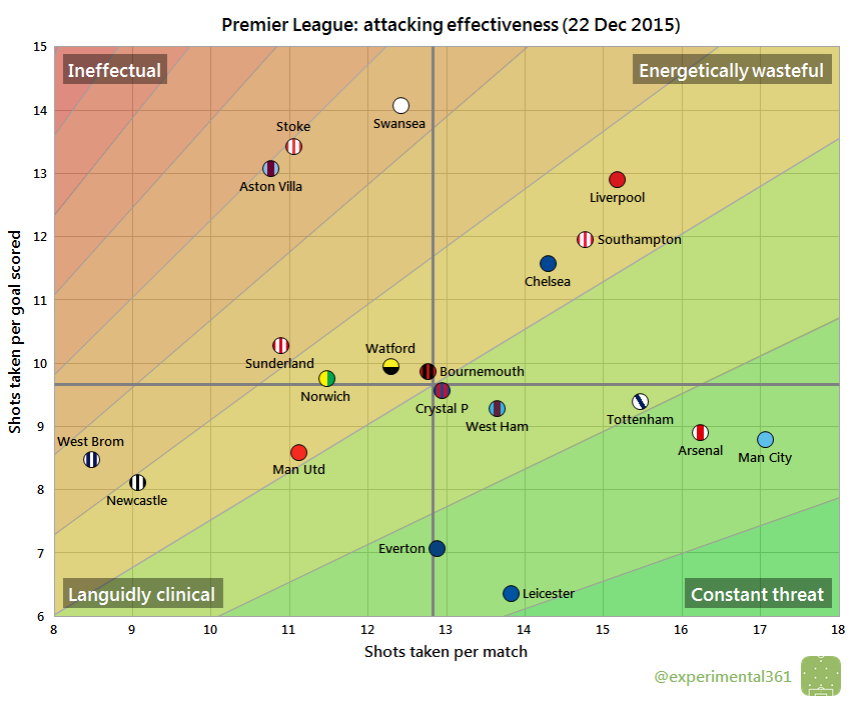 Leicester‘s table-topping performance owes much to their attack, which has been the division’s most clinical so far; marginally more efficient than Everton‘s.

Both have been around twice as sharp as struggling Swansea‘s – the top flight’s most wasteful – despite taking a relatively similar number of shots at goal.

Three of the division’s most notably underachieving sides – Chelsea, Liverpool and Southampton – have all struggled to convert their chances this season, despite creating a healthy amount of them.

While West Brom and Newcastle don’t fashion many attempts at goal, they have both been better than average at converting them. 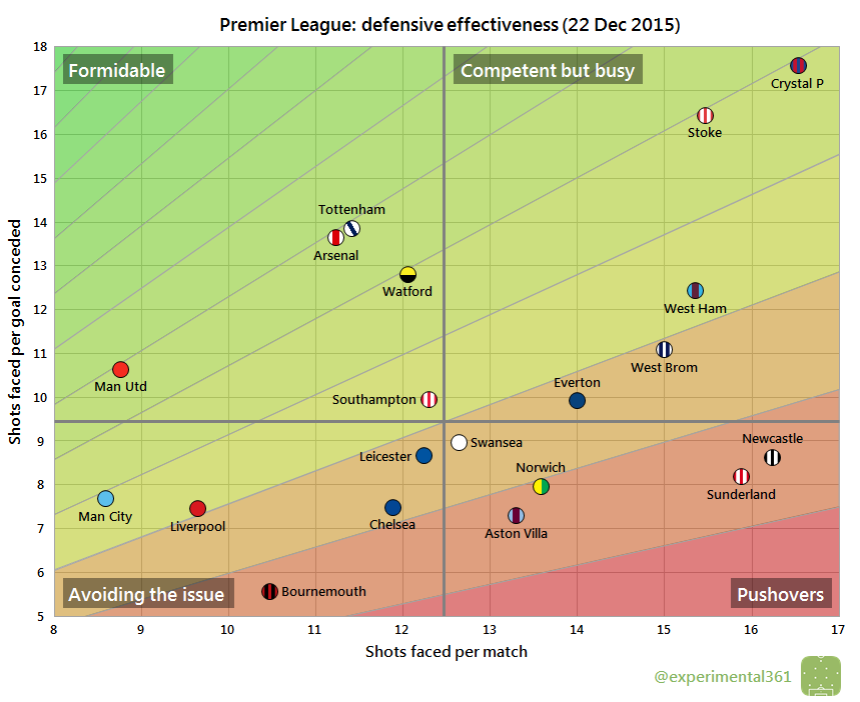 We saw in the first graphic that Crystal Palace allow plenty of shots and we can see here that they – along with Stoke – have been incredibly effective at repelling them. It will be interesting to see whether they can sustain this over the entire season.

For a newly-promoted side, Bournemouth have allowed opponents impressively few shots – the fourth lowest total – but have found it incredibly difficult to keep them out. The average Premier League defence has soaked up an additional four efforts for each goal conceded.

While Man Utd and Man City – and also Liverpool – have allowed a similarly low number of attempts at their goal, the latter two have been no match for United at keeping them out.

Finally here’s an attempt at correcting the first graphic for the quality of chances created and allowed, using the same “expected goals” values that power my shot timelines (explained here). The reason for doing this is that the results tend to correlate more strongly with performance than when we treat all shots equally.

This won’t give as sophisticated results as some of the other Premier League expected goals models (which use more sophisticated levels of data), but hopefully it won’t be wildly different. 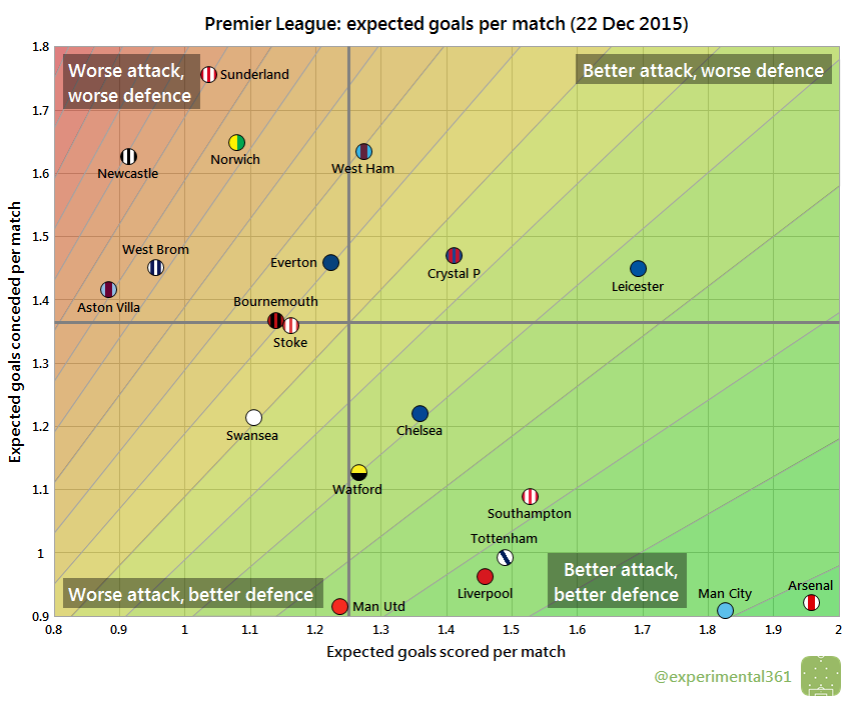 The current two title favourites – Man City and Arsenal – look to be streets ahead of the competition here. While a handful of other sides are operating similarly prohibitive defences, none of these can simultaneously emulate their attacking performances.

We can see that Leicester are operating the next scariest attack (in terms of chance creation at least) but look relatively ordinary defensively. Therefore if their title charge does fizzle out it looks more likely that their defence will have let them down than their attack.