Here are updated scatter graphics for the National League, which compare the attacking and defensive performance of each club. These are explained here if you haven’t seen them before and the previous instalment is here.

Grimsby remain the division’s most dominant side, taking more shots than anyone except Woking and allowing fewer than everyone else; marginally fewer than Eastleigh.

Woking may create plenty of chances but only two clubs – Kidderminster and Altrincham – have allowed more. At the opposite end of the spectrum, fellow play-off chasers Braintree allow fewer shots than all but four clubs but only four have taken fewer themselves.

Gateshead are comfortably inside the top half despite taking fewer shots than anyone else – this will become less mysterious in the next graphic. 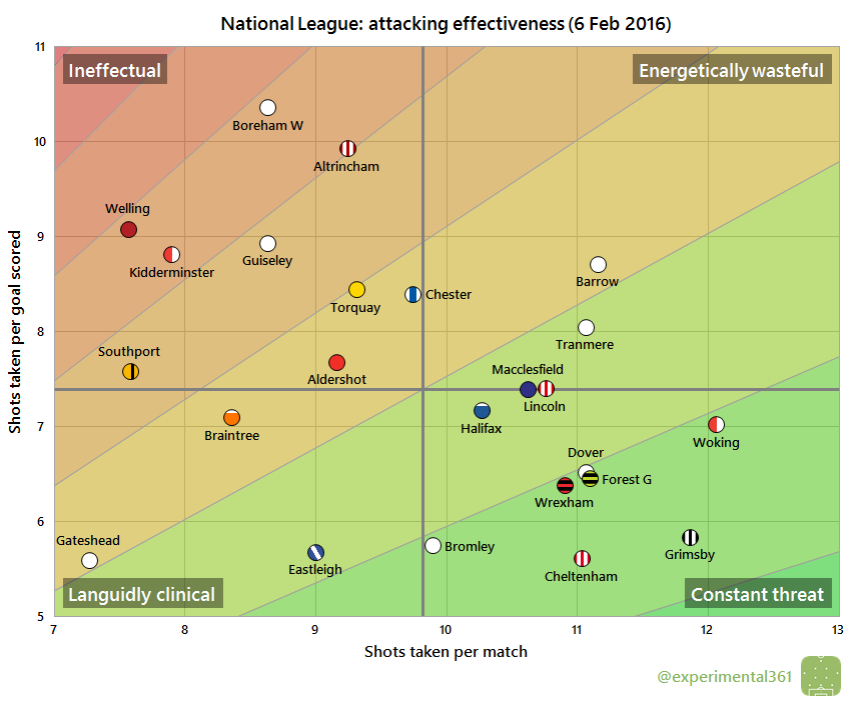 I mentioned Gateshead above as doing well despite taking fewer shots than anyone else, and we can see here that they are among the most clinical finishers in the division.

While it’s no surprise to see Grimsby, Cheltenham and Eastleigh – all in the current top five – among the sharpest finishers at the bottom of the graphic, it’s interesting to see newly-promoted Bromley netting with similar precision.

The most wasteful finishers are another newly-promoted side: Boreham Wood have needed almost twice as many attempts to score each goal so far this season/

Two sides stand out at the top: both Cheltenham and Braintree have been impressively resilient at the back, soaking up around four more shots for each goal conceded than the average club.

Despite allowing among the fewest shots, Eastleigh and Wrexham concede very readily from those their opponents are able to take.

While Altrincham have allowed the most shots by far, they’ve been slightly better than average at keeping them out. The likes of Bromley, Torquay and Halifax have been far more vulnerable from fewer shots faced. 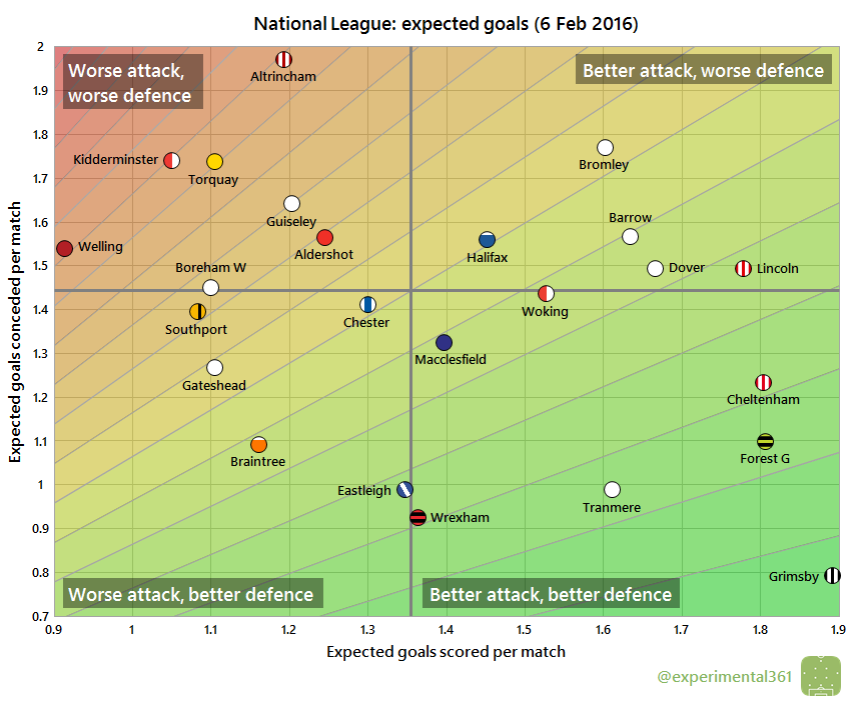 Grimsby remain ensconced in the bottom right corner: when shots are corrected for quality they stand out as the division’s best all-round performers.

Tranmere‘s recent surge into the promotion reckoning will not be a surprise to anyone who’s tracked their expected goals numbers: they’ve looked consistently strong in defence and their attacking performances have now improved to match.

In the top right we find Bromley, who we’ve seen are impressive going forward but at the expense of defensive solidity, which is nonetheless entertaining for the neutral. The safety-first approach of Braintree in the bottom left has resulted in an average of just 1.9 goals in each of their matches, compared with the 3.5 witnessed in Bromley’s.