Here are updated scatter graphics for the Premier League, which compare the attacking and defensive performance of each club. These are explained here if you haven’t seen them before. 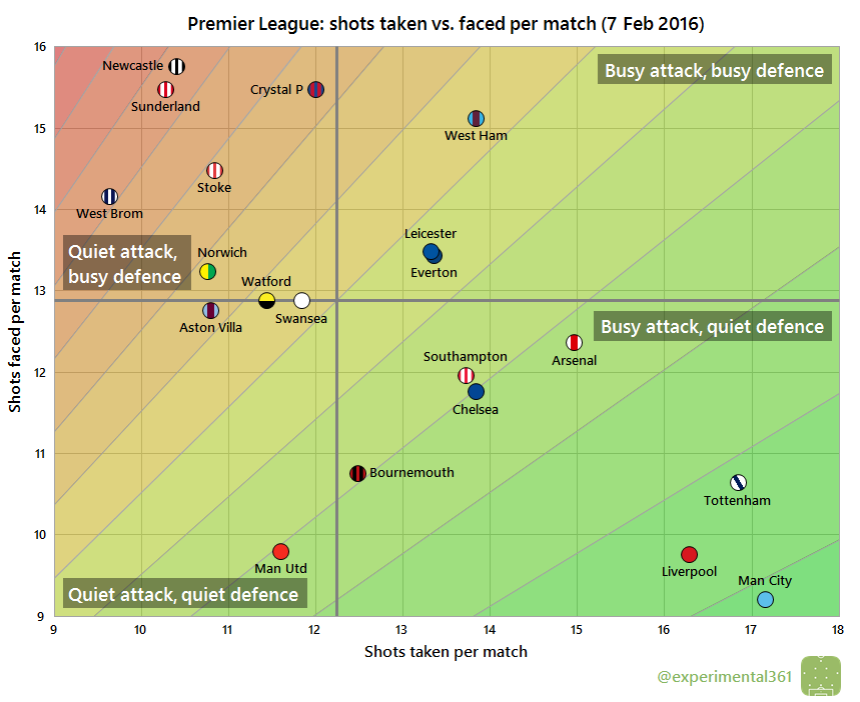 Their prospects of a top four finish may be looking increasingly slim but Liverpool are still dominating matches; more so than anyone except Man City and Tottenham. All three clubs, situated in the bottom right, have taken far more shots than they’ve faced this season. However the next graphic will show how the Reds’ performances differ in a fundamentally important way.

Down in the bottom left, Man Utd have been just as difficult to break down at the back but have offered far less going forward. The opposite can be said of West Ham in the top right, who may be taking an above-average number of shots but are also allowing their opponents to run riot.

The top left of the graphic shows that it’s not been an enjoyable season for fans in the North East, with both Newcastle and Sunderland spending most of their time on the back foot.

Liverpool may taken plenty of shots but they have struggled to make them count, with only bottom side Aston Villa having needed more attempts on average to score each of their Premier League goals this season.

At the bottom of the graphic we see that their neighbours Everton are one of the division’s two most clinical finishers. Alongside leaders Leicester they have taken slightly more than seven shots for each goal scored: over five fewer than the Reds have needed.

While Sunderland have shot relatively infrequently, they have at least been above average at turning their efforts into goals, as have Man Utd.

Two sides in the top right stand out: Crystal Palace and West Ham have all made a habit out of allowing – and soaking up – plenty of attempts at their goal.

Tottenham deserve a mention for the best all-round defensive performance here, allowing relatively few efforts and – alongside local rivals Arsenal – being one of the toughest sides to break down.

Bournemouth have allowed opponents similarly few chances but have struggled to keep them out, with the aforementioned two North London sides able to absorb more than twice as many shots for each goal conceded as the Cherries. 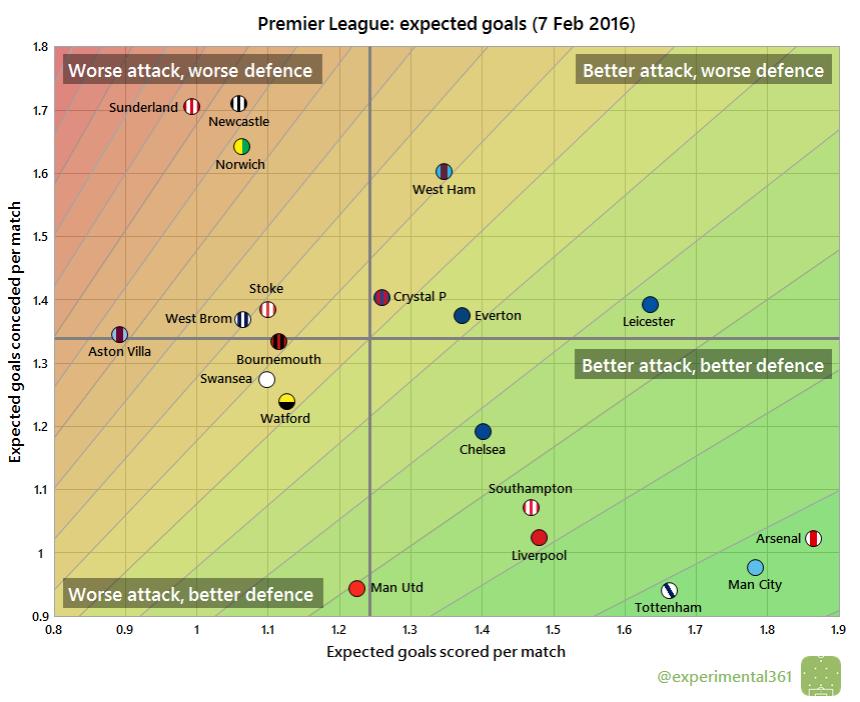 When we correct for chance quality like this we can see that Norwich join Sunderland and Newcastle in the worrying top left corner. All three clubs are in danger of relegation if things don’t improve (although it’s unlikely that all three can be relegated given the extent of Aston Villa’s predicament).

Speaking of Aston Villa, they’ve looked relatively average at the back but have offered the least going forward this season, so it looks like their poor attack has been the biggest reason for their disastrous campaign.

In the bottom right, the three best all-round performers are the three sides immediately behind leaders Leicester: Arsenal, Man City and Tottenham. All three have put in narrowly better attacking performances than the Foxes and have restricted their opponents far more effectively overall, so perhaps there’s life in the title race yet.