Here are updated scatter graphics for the Championship, which compare the attacking and defensive performance of each club. These are explained here if you haven’t seen them before. 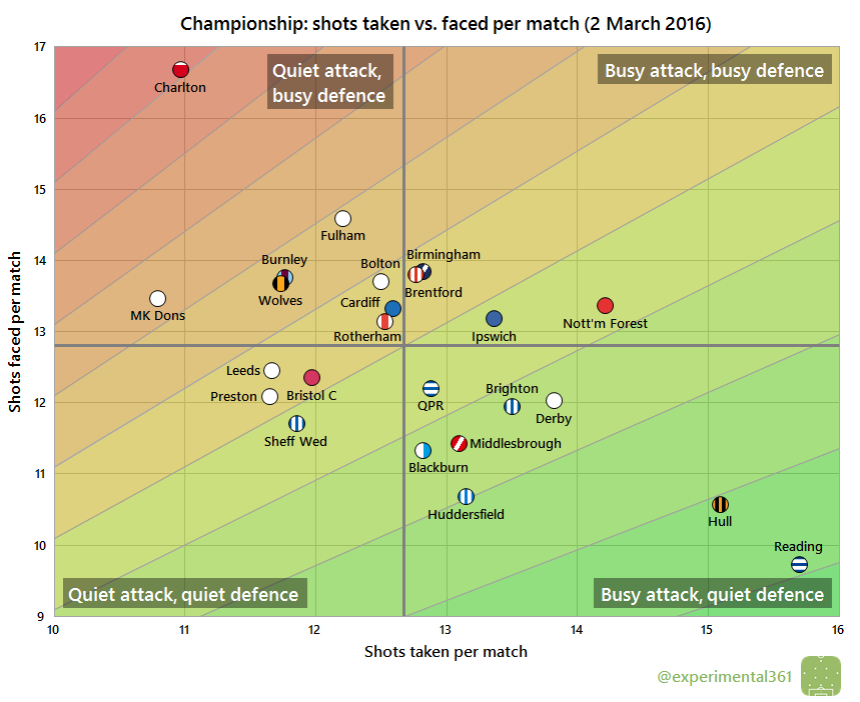 Poor Charlton stick out in the top left and have been overrun this season: the Addicks have faced an average of around five and a half shots more per match than they’ve taken themselves.

A more surprising occupant of the “bad quadrant” is Burnley, who are putting together a strong promotion challenge despite being regularly out-shot. The next two graphics will show how they’ve managed this.

Moving over to the “good quadrant” in the bottom right, Hull and Reading have been the division’s most dominant sides. While Hull are contenders for automatic promotion the Royals are languishing in mid-table, with the fourth graphic in this post illustrating best how they can be performing so differently.

In the bottom left we can see that there’s been relatively little action in matches involving Sheff Wed or Preston: each has kept things tight at the back but seemingly at the cost of a cutting edge up front.

We look to have two layers of teams here: one of wasteful finishers that sweeps across the top of the graphic and another more clinical bunch beneath. Among these are Blackburn and Bolton who, despite carving out a respectable number of chances, have failed to take advantage and are enduring poor campaigns as a result.

Reading and Nottingham Forest have taken plenty of shots but failed to make them count, but both MK Dons and Charlton have the additional problem of not creating many opportunities to begin with.

Burnley may carve out relatively few efforts but are leading the way in terms of chance conversion. They, along with Sheff Wed and Fulham, have been far more efficient at finishing than the rest of the division, which explains how the both the Clarets and the Owls are remaining in the promotion hunt despite taking relatively few shots at goal.

Middlesbrough and Hull have been by far the best defensive performer, allowing few shots and soaking up nearly twice as many as the average side for each goal conceded. It has taken over twice as many attempts to breach their defences than the division’s most porous back lines – those of Huddersfield, Bristol City and Rotherham.

The next most resilient defences – those of Burnley, Forest and Birmingham – look to be sustaining themselves via an ability to capably absorb an above-average amount of attempts at their goal.

In the extreme bottom left we find Reading and Huddersfield who may be allowing very few attempts at their goal but are faring badly at repelling those that their opponents manage to dispatch.

One of the major differences from the first graphic is the position of Reading. They were alongside Hull in the bottom right corner before, when all we were interested in was the quantity of shots, but when we correct for quality they lurch sharply back towards the middle. This suggests that the average quality of the shots they’re taking is low and the ones they’re facing high, undermining their apparent dominance of matches.

In the opposite (top left) corner, Charlton look to be in trouble, although MK Dons‘ attack has looked weaker and the defences of Rotherham and Fulham have been nearly as permissive. The next weakest attack – that of Preston – has at least been offset by a solid defence.

Next to Middlesbrough on the graphic are the Blackburn side that defeated them yesterday and were the first club since Hull in early November to score more than once against them. Despite their lowly league position Rovers have performed pretty well, so their fortunes could well improve before too long.