I’ve re-run my E Ratings model after the midweek fixtures last night to see what effect they’ve had on where each Championship club is predicted to end up at the end of the season.

If you’ve not seen these graphics before, they show the cumulative probability of where each club could finish, in descending order of their average final league position across 10,000 simulations of the rest of the season. The simulations are generated using each club’s current E Ratings and those of their remaining opponents.

You can think of the ordering of the teams down the left hand side as a “best guess” of the final league table, with the coloured bars showing the relative likelihood of each club ending up in a certain section of the table.

Brighton’s convincing win over QPR, coupled with a draw between the current top two of Middlesbrough and Burnley, has forced the automatic promotion race wide open. However with the Seagulls still having to face Boro and fifth-placed Derby, the Clarets’ easier-looking run-in sees them retain an edge. 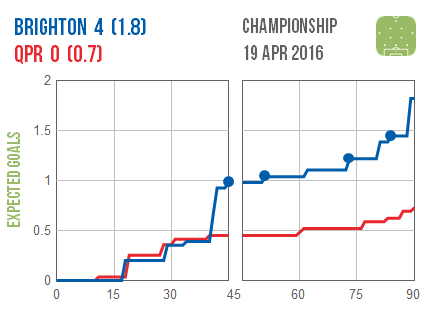 Sheffield Wednesday may be frustrated to have dropped points at home to MK Dons, but Cardiff’s defeat at Brentford has left it looking very likely that the Owls’ play-off place is now secure. The Welsh side are now six points behind and with a far inferior goal difference, but if they were to beat bottom side Bolton at home this weekend while Wednesday lost at home to Derby – not the most unrealistic scenario – then Cardiff’s trip to Hillsborough at the end of April could be a cracker.

The bottom three has looked pretty stable for some time: while MK Dons secured a point yesterday evening, so did nearest rivals Rotherham. Incredibly there are now five clubs tied on 48 points above the drop zone, which is nine more than the Dons have accrued with nine left to play for, so it’s not impossible for at least one of those clubs to end the season on a losing streak and sustain the possibility of a great escape.