As is now traditional, I’ve combined the newly-released fixture lists with an aggregation of leading bookmakers’ odds to visualise where each National League club’s tough and easy matches appear to be next season. Each row in the matrices below lists a club’s league matches in chronological order, colour-coded based on how difficult they appear to be.

As is also traditional, I’ve been unable to resist meddling with the format again. I’ve simplified things slightly this time around as there are only three categories: title favourites in red, relegation favourites in blue and everybody else in grey. I’ve divided them up based on where there was the biggest “jump” in odds, so the sizes of the categories varies a bit.

I’ve also added in a numbering system so that you can identify which fixtures are which, rather than just which category each opponent belongs to. Clubs are listed in descending order of where their odds of winning the title currently indicate that they’ll finish, and these numbers are repeated in each box.

The plan is to update these towards the start of the new season, once the odds have been updated to reflect transfers etc, but I can’t imagine that too much will change.

One weird quirk I’ve noticed is that the last set of fixtures in 2016 is immediately followed by the reverse of the same matches in the next game (for example, Aldershot host Woking on Boxing Day and then travel to Aldershot on New Year’s Day). This happens for every match in all three divisions and I’ve never noticed it before – at first I thought I’d screwed my code up somehow. 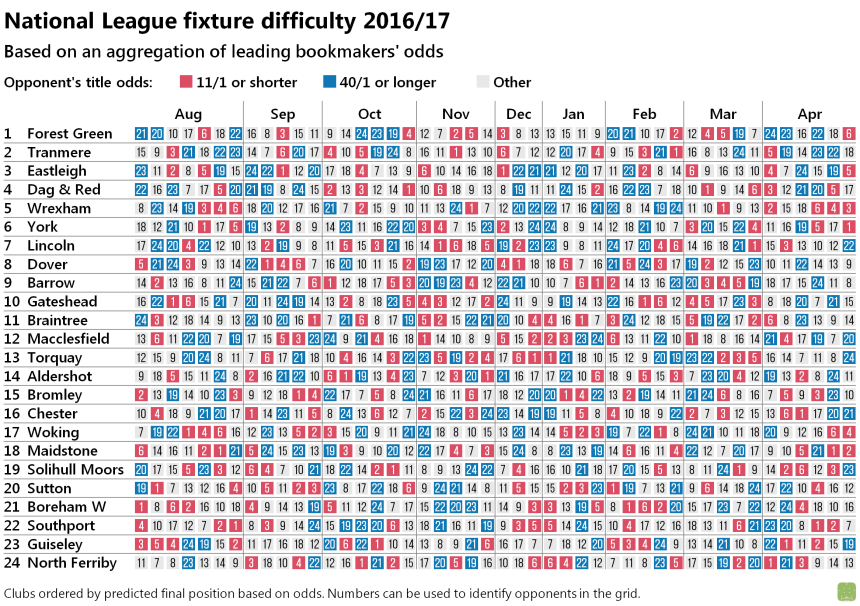 Wrexham have a tough finish: they play all five promotion challengers in their last nine matches without a single minnow to ease the pain. If they’re not in a strong position by mid-March then they’re in danger of falling out of the reckoning.

Guiseley will do well to have any points on the board from their first three matches, all of which are against sides fancied for promotion, but their next two fixtures are against clubs expected to struggle.

Torquay have a gentle start to the season: nobody goes for longer without meeting one of the six top-rated sides than their opening eight-match stretch.

Altrincham have a horrible start, with three of their first four matches – and four of their first seven – against fellow promotion challengers, but they then have a clear run until late January.

Stockport look to have one of the easiest run-ins, with four of their last five matches pitting them against teams expected to be near the relegation zone.

Bath have a similarly straightforward start, with four of their first six matches against teams expected to struggle, but in late October they have to face the five toughest clubs in the space of six games.