The EFL’s top attackers so far: a quick look

I was asked this morning about measuring expected goals by player, based on a graph Nick Goff had pulled together for the Wolves squad:

#wwfc player Expected Goals per 90min through 11 games. All a bit jumbly at this stage as so many players used. pic.twitter.com/ez1KOWbktJ

…so I thought it would be worth quickly revisiting this analysis I did last season to see how the division’s most prominent attackers stack up against each other.

I’ve filtered out anyone who hasn’t been on the pitch for at least half of their club’s league minutes this season, as there are a few players with a ridiculous “goals per match” ratio due to coming on late in one game and scoring.

Unlike last season, where I just looked at top scorers, I also wanted to include the players who are getting into good shooting positions but not scoring that much, as they could well be some of the next to go on scoring runs. Therefore I’ve whittled it down to the 33 EFL players who are either in the top 20 for goals scored per 90 minutes or for expected goals scored per 90 minutes. 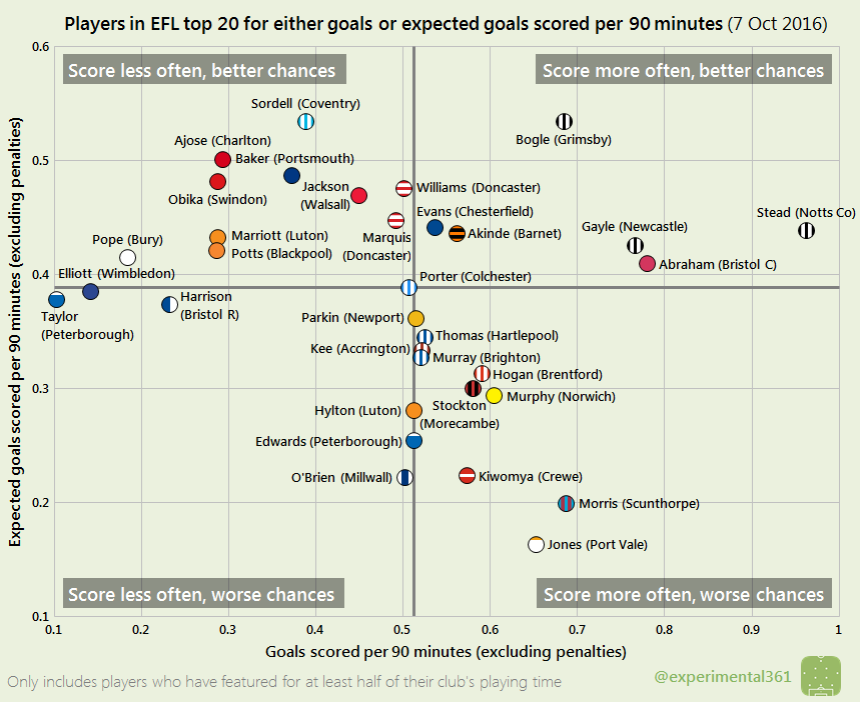 The top right quadrant contains the players who are standing out: those who are consistently getting on the end of good chances and finding the net often. Notts County’s Jon Stead is netting at an impressive rate of almost a goal per 90 minutes but Grimsby’s Omar Bogle looks to be scoring at a more sustainable rate given how much better his opportunities have been relative to the number of goals he’s scored.

Across from them in the top left are players who have also found themselves in good scoring positions this season but not found the net as often. While there could be the odd bad finisher in here, this quadrant could also contain some of the players likely to embark on a rich vein of goalscoring form in the near future. Coventry’s Marvin Sordell and Charlton’s Nick Ajose have both had some excellent chances this season so it wouldn’t be a surprise if they or the others near them on the graphic started to bang goals in more regularly.

The bottom right quadrant contains players whose scoring exploits outstrip the underlying quality of their chances and may therefore be unsustainable. Scunthorpe’s Josh Morris and Port Vale’s Alex Jones in particular have both netted at an excellent rate from some very modest-looking opportunities, so without an uptick in chance quality it’s likely that they won’t be able to maintain their current form.

To illustrate this, if we look back at the graphic from last season the bottom right was almost deserted, suggesting that high-scoring players who subsist on lower quality chances will eventually see their scoring rates drift to match.

A quick note on the axes

You may have noticed that the average for each axis is different: the average player here is scoring around 0.5 goals per game from 0.4 goals’ worth of chances. The main reason for this is that the “expected goals” value of each shot is calculated based on shots taken by all players, while most of the players shown here will be above-average finishers. It’s also likely that a few people are on hot streaks, and these numbers will move slightly closer together as the season progresses and any luck evens out.