At the end of November I created a form table graphic as a way to get a short-term snapshot of how teams were faring relative to their underlying performances, but I realised I still needed something which shows how clubs are performing over the longer term.

Fortunately a graphic already exists which does exactly what I needed to do – it’s one of many great charts produced for the Swedish Allsvenskan by @zorba138, who I recommend following for visual inspiration even if you’re not all that interested in what Swedish clubs are up to. The graphic I’ll be appropriating (with his prior permission) is the last one in this season summary post on his site.

How the charts work

Here’s what my version looks like, which I’ll explain below: 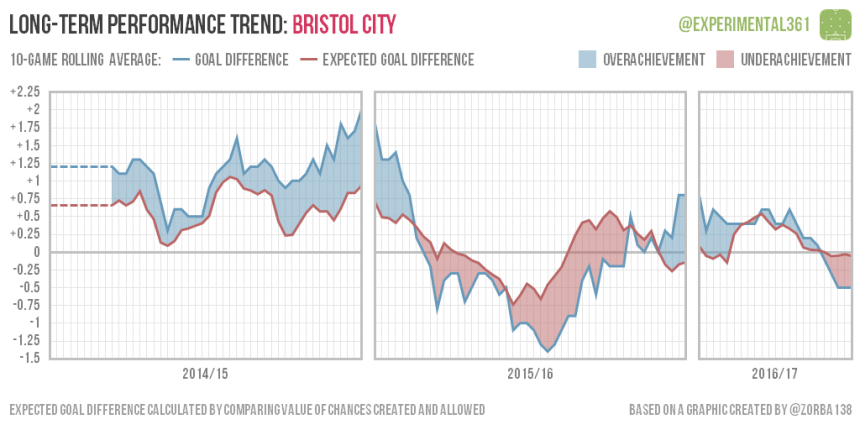 The way these charts work is as follows. For each club there are two lines tracking their performance since the start of the season before last:

Expected goals are explained in depth here but put simply they’re a way of assigning a value to each shot based on how often shots of that type are scored. Therefore the expected goal difference tells us what the goal difference of the average club would have been if they created and allowed the same chances.

How the charts can be used

In addition to providing a handy way of tracking a club’s fortunes over time, comparing the positions of the two lines allows us to make some observations about whether their performances are likely to be sustainable.

Over the long term the balance of chances created is a pretty accurate predictor of a team’s performances and differences often have more to do with random variation, which tends to influence goalscoring rates far more than individual differences in finishing or goalkeeping skill.

Therefore if the two lines are far apart – i.e. the balance of goals scored and chances created at a specific point in time are significantly different – then it’s likely that they’ll converge again. This is borne out by looking at a few of these charts: for most clubs the blue “actual goal difference” line seems to orbit the red “expected goal difference” line and doesn’t stray far away from it for long.

However this won’t always be the case, as some clubs’ attacking or defensive skill will be significantly different from the average used to calculate the expected goals values of shots. The more persistent the difference between the two lines is, the more I’d be tempted to suspect that something else is going on.

For example, Newcastle’s squad is far more impressive than most other Championship teams, so I suspect that a big chunk of their “overachievement” this season (below) is down to superior ability:

It’s worth flagging at this stage that neither of these lines is tracking a club’s true level of “ability”. Ten games is far too short a period over which to measure a club’s strength as a tough or easy run of games can easily distort this (which is why I have the E Ratings, which correct for all of this stuff). However you’d still expect the two lines aren’t moving in unison if the only variable was opponent strength.

Anyway that’s plenty of explanation. I’ll be producing charts for each club on a division-by-division basis which I’ll split out as separate posts that you can find here.