It’s been roughly a month since the last set was produced so I’ve updated the scatter graphics, each of which is explained briefly below and at length here.

Fulham are racking up around two shots more per game than leaders Newcastle at the moment, which is pretty impressive going. Free-falling Bristol City are also outshooting the Magpies overall, but allow opponents a fair few chances in return.

Huddersfield‘s own promotion challenge looks like it owes more to a solid defence, which has allowed fewer shots than anyone else’s and just over half as many as bottom side Rotherham‘s.

If Bristol City could convert their many chances more reliably then they’d surely still be in the top half of the table. However Derby edge out nearby Burton as the most wasteful finishers so far – struggling Wigan are the only other team who have taken over 13 shots for each goal scored.

Newcastle have been the most clinical in front of goal, with Barnsley edging out title challengers Brighton as the next most efficient finishers. Despite their struggles this season, Norwich‘s attack also remains one of the division’s best – we’ll see where their problems lie below. 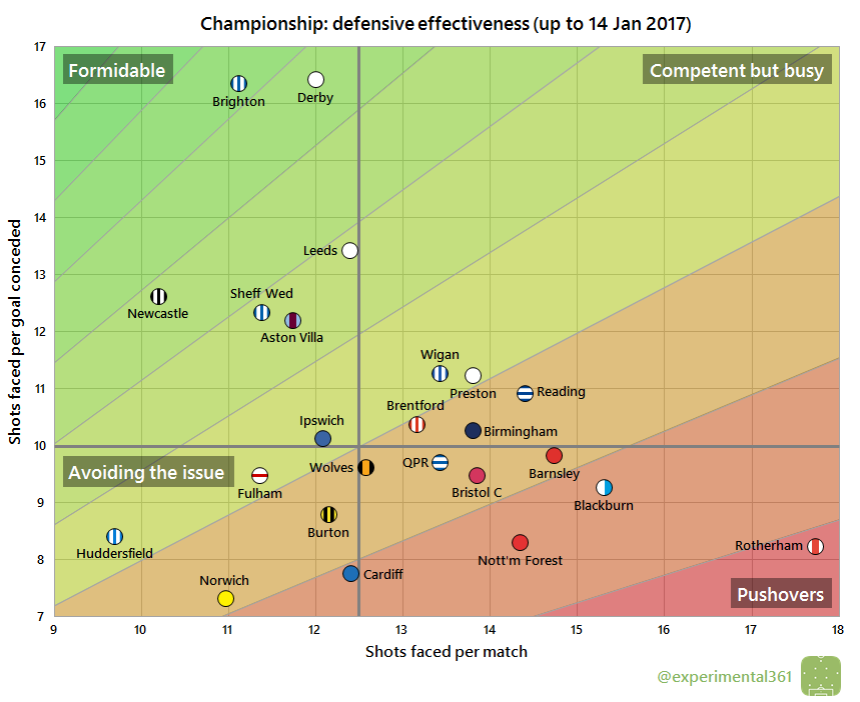 Both Brighton and Derby have soaked up over six more attempts than the average Championship side for each goal that they’ve conceded, which is pretty impressive going.

Poor Norwich have allowed similarly few shots to the Seagulls but conceded over twice as readily. The Canaries operate the division’s most porous defence, with only a shade over seven attempts needed to breach them on average.

When we correct for shot quality, Fulham‘s attack remains the most impressive and Brighton look to be operating the most effective defence. However both Newcastle and Sheff Wed have looked pretty handy at both ends of the pitch themselves.

Wigan and Ipswich – while looking respectable in defence – have created less than a goal’s worth of chances per match, so both clubs should probably be looking to address this in the January window.

Both Aston Villa and Derby have switched managers after disappointing starts to their respective campaigns but neither has yet added much attacking verve to the strong defences they inherited. Having said that, membership of the bottom left quadrant doesn’t seem to be harming Leeds and Huddersfield all that much.