What’s the longest each club has gone without scoring / conceding a league goal this season?

I saw plenty being made of Sunderland’s current barren run after their 3-0 defeat to Manchester United earlier today and realised that I had half-built a way of working out how long each club’s longest goalscoring drought is from the last time something like this happened. I was able to polish it off pretty quickly and run it for all four divisions, plus tweak it slightly to also look at the longest run without conceding a goal.

Below are two graphs for each of the top four English divisions, showing each club’s longest run this season in minutes (including injury time).

Let’s start with the positive and look at the longest runs of minutes without conceding a goal: 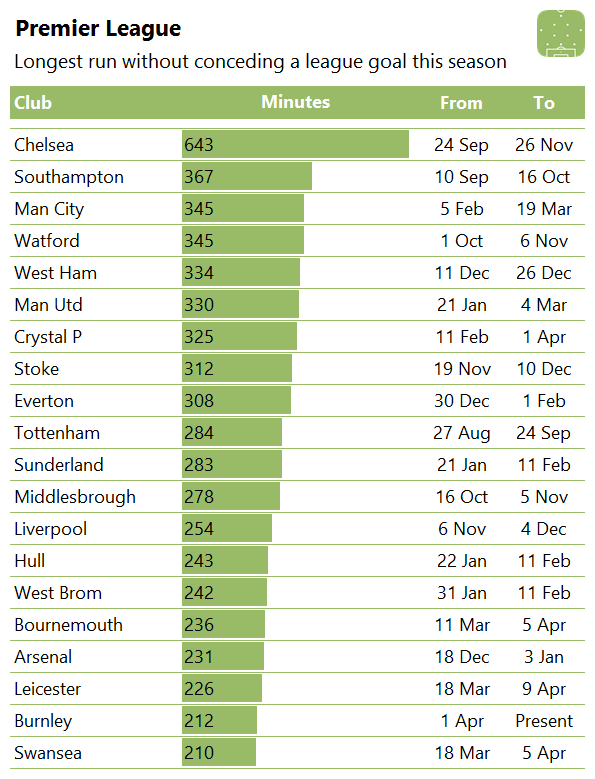 We can see that leaders Chelsea have the longest streak without conceding a league goal. As this is the first graphic, let’s just check the maths for this one by looking at their results: 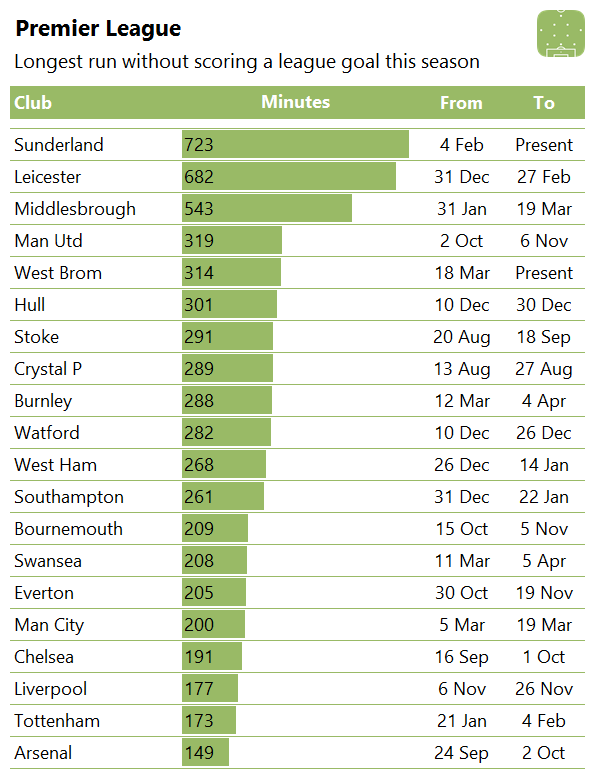 So Sunderland‘s current run is the worst of any team in the top flight this season, with Leicester‘s horrible post-Christmas form the second-longest drought and notoriously goal-shy Middlesbrough‘s recent lean spell in third.

The bottom of the list – the clubs who have never gone long without a goal – isn’t all that surprising: it’s the current top six minus Man Utd, whose early season struggles in front of goal provided one of the Premier League’s longest droughts this season.

Now let’s look at the second tier, starting again with the longest duration between goals conceded: 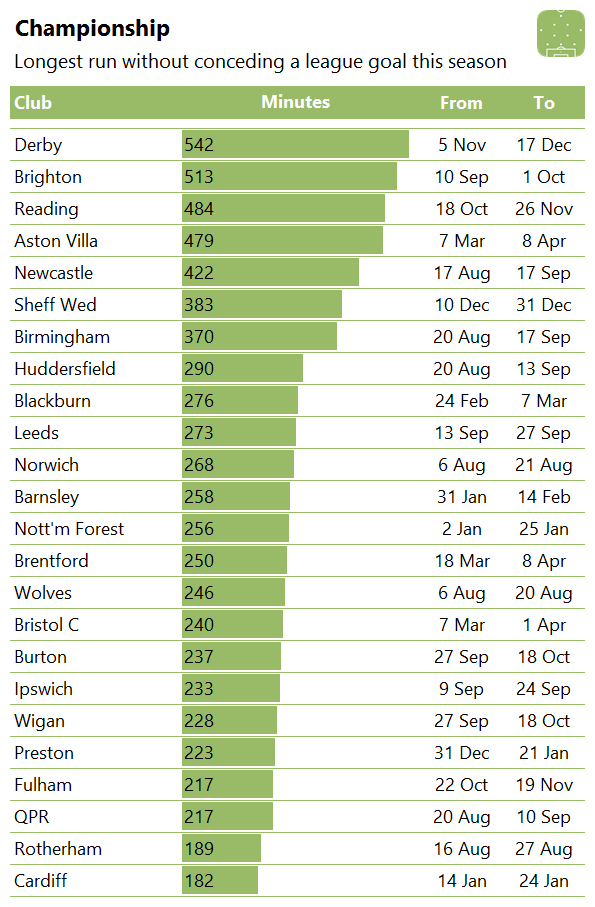 While Derby‘s attack took a while to start firing this season, their defence has looked far more consistent so it’s not surprising to see them top the list. The Rams and current league leaders Brighton are the only two clubs to have kept the ball out of their net for a stretch of over 500 minutes.

At the bottom Cardiff‘s longest gap between goals conceded is still shorter than already-relegated Rotherham‘s, so perhaps that should be an area of focus for Neil Warnock over the summer.

Now let’s take a look at those barren spells: 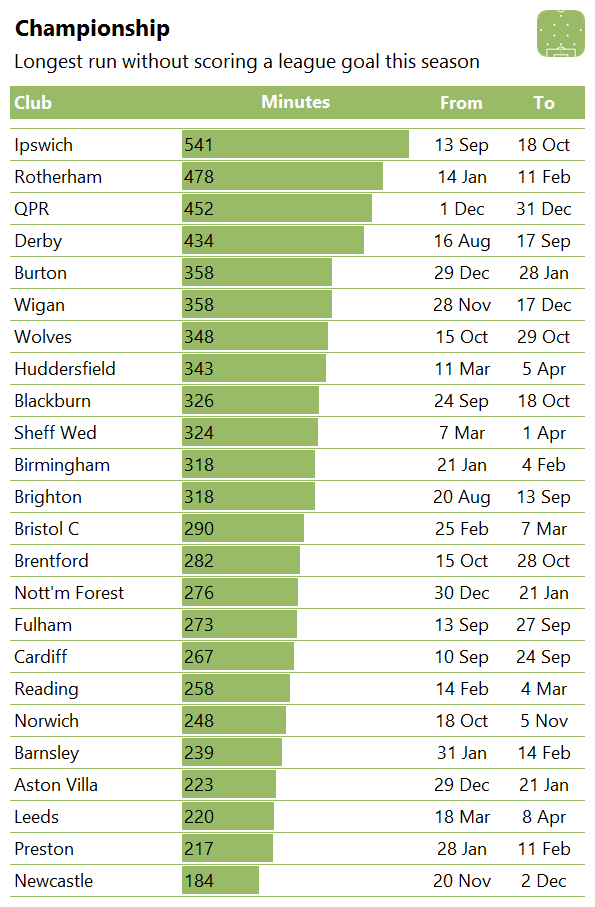 Regular readers of my model predictions will know that Ipswich‘s attack has been really suspect this season, so again I’m not shocked to see them top this list with the longest gap between league goals scored.

With the attacking resources available to Newcastle it’s not surprising to see them at the good end of the list either. The longest their fans have had to wait between league goals this season was from Dwight Gayle’s second in a win over Leeds on 20 November and Matt Ritchie’s opener just before half time at Nottingham Forest on 2 December.

Now to the third tier, where we have a run even more impressive than Chelsea’s: 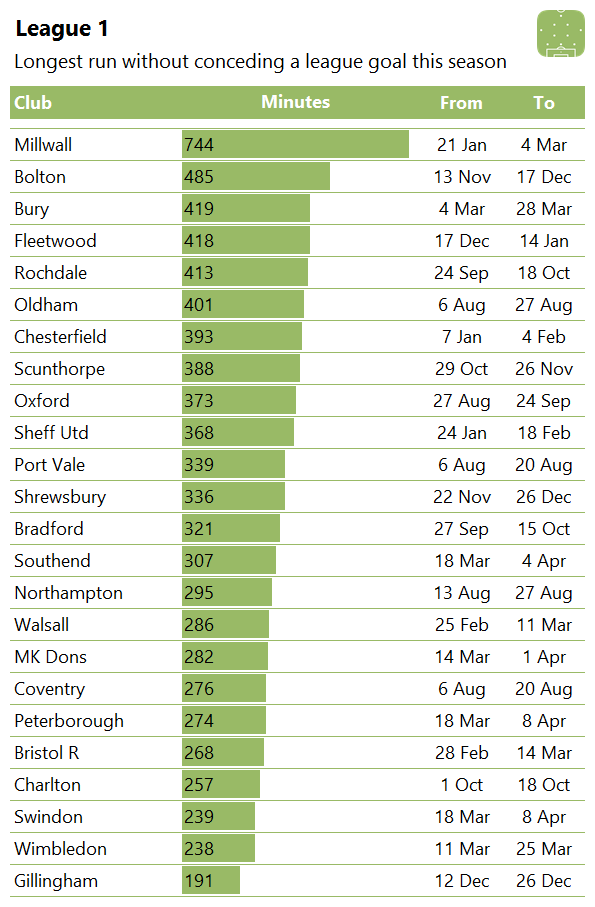 So Millwall have actually gone for longer without conceding than Chelsea this season. After Bradford’s equaliser an hour into their 1-1 draw on 21 January, their defence wasn’t breached in any of their subsequent seven league games: a spell which also included two 1-0 FA Cup wins against Premier League opposition. It was another equaliser, half an hour into a win over MK Dons, which ended their run on 4 March. 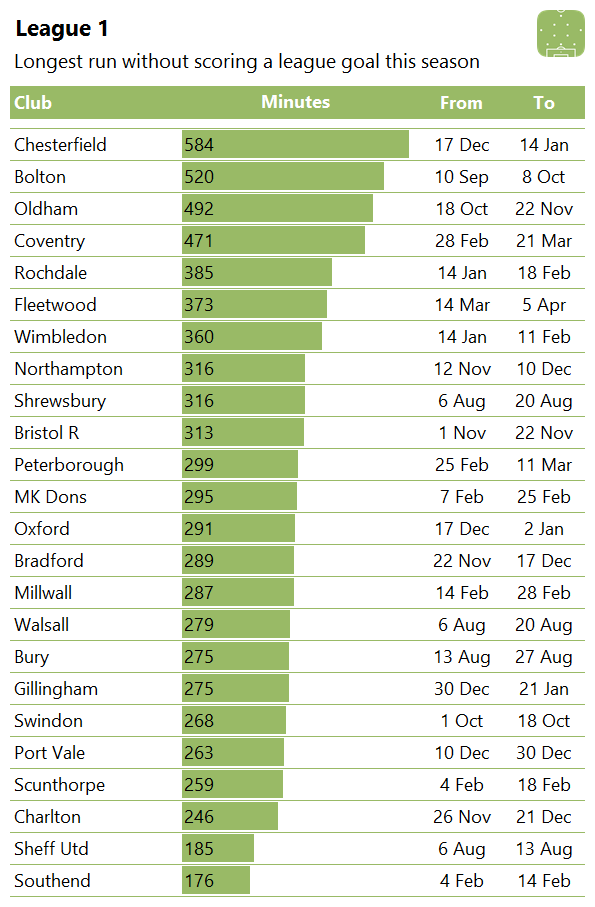 While it’s not that surprising to see relegation-threatened Chesterfield topping the list with the longest barren run, I was surprised to see Bolton – who look nailed on for promotion – not far behind. After an early goal against MK Dons on 10 September, they then failed to score in any of their next four matches and for most of the fifth – their blushes were spared by a late Swindon own goal on 8 October.

Finally here are the sequences for League 2: 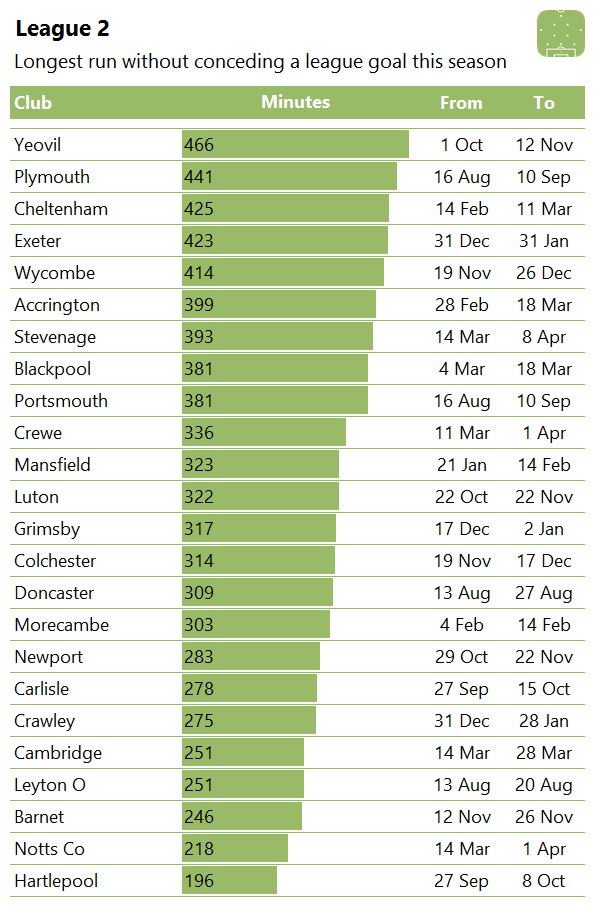 Yeovil‘s defence kept them up last season so it’s not all that surprising to see them at the top of this list – they didn’t concede a league goal for around six weeks. In fact, the four longest runs have all been racked up by Westcountry sides, with Plymouth, Cheltenham and Exeter also going a long time without being breached this term. 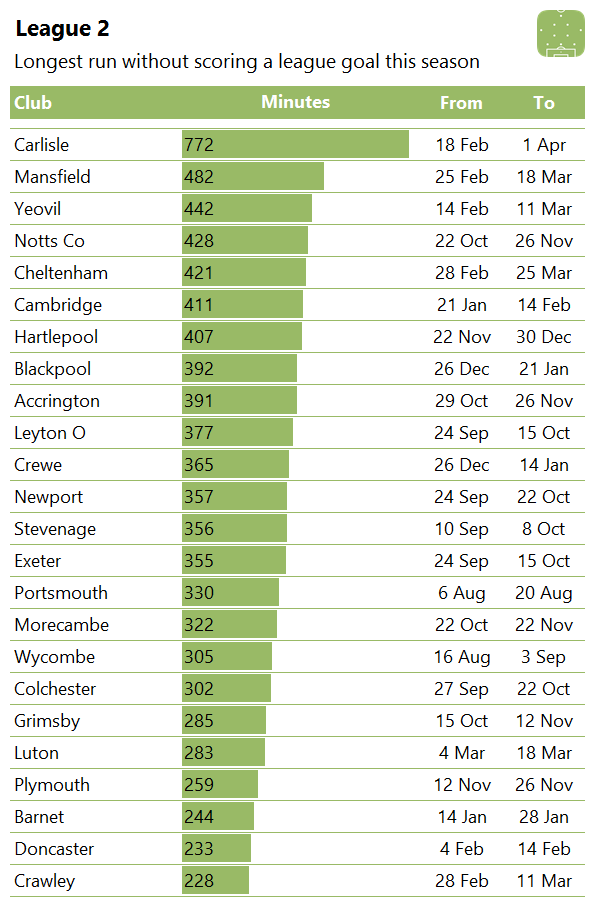 So while Sunderland’s current drought is pretty awful, Carlisle have already endured worse this season with a run they only ended on Saturday by scoring in their defeat to Notts County. However another 50 minutes of football without finding the net will see the Black Cats break that unwanted record.

It’s no surprise to see already-promoted Doncaster among the shortest droughts this season, but it’s impressive to see Crawley with the smallest gap between goals.

For ease of comparison I’ve put the top and bottom five for each measure in a separate graphic. First here’s the longest runs of minutes without conceding a league goal:

… and here are the best and worst runs of minutes without scoring a league goal: