As usual, I’ve taken the newly-released EFL fixtures and combined them with an aggregation of leading bookmakers’ odds to visualise where each club’s tough and easy matches appear to be next season. Each row in the matrix below lists a club’s league matches in chronological order, colour-coded based on how difficult they appear to be and the clubs themselves are sorted and numbered by where the odds imply they’ll finish in the table.

I’ve coloured the six strongest-looking clubs (based purely on the odds) in red and the six weakest-looking in blue, but you can use the numbers to identify which fixtures are which. 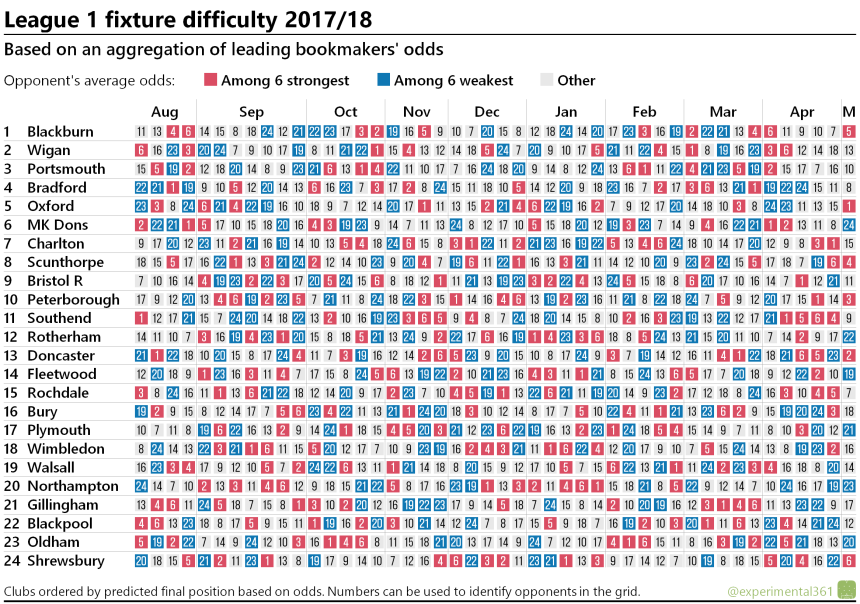 It may be a while before Blackburn gain momentum, as they go the longest of any side without facing one of the six teams expected to struggle the most, with two testing encounters against fellow promotion hopefuls early on. One of those latter games is against Bradford, whose other fixtures in August look winnable enough to propel them into an early lead.

It’s a tough end to the campaign for Southend, who face four likely promotion contenders in their last five fixtures, but apart from a tough opening day test against Blackburn their start looks pretty gentle. The Shrimpers then play four likely relegation strugglers in their next nine games and don’t face another tricky team until October.

Northampton meanwhile have a far more straightforward run-in, with all of their toughest games played by the end of February and three of their last five matches looking particularly winnable. This makes up for a tough start that sees the Cobblers face four of the big sides in their first ten outings.

You can find similar matrices for the other two EFL divisions here and if you’re wondering about the Premier League, I did one of these for PA which can be seen here in full and as a snazzier “who has the toughest start” version for Bwin here.