With a few managers losing their jobs today and the combination of an FA Cup round and some international fixtures thinning out the domestic fixture list, it felt like a good time to refresh the scatter graphics. These compare the attacking and defensive performances of every team in a division. Each of the four graphics is explained briefly below and at length here.

While their promotion challenge may be faltering somewhat, Barnsley remain the most dominant side in the division, although with high-flying Sunderland and Peterborough both having taken fewer shots than they’ve faced there’s clearly more to success than just these raw numbers. 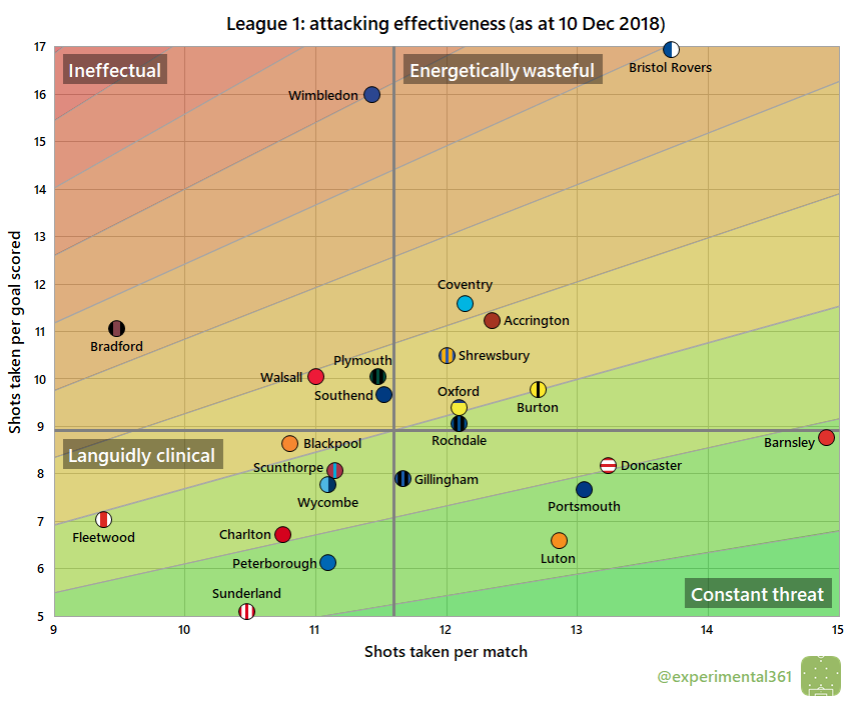 The struggles of Bristol Rovers and Wimbledon this season owe no small part to their wayward finishing, with Rovers’ predicament particularly frustrating given that only Barnsley have out-shot them so far. The aforementioned Sunderland and Peterborough meanwhile can both be thanking their clinical strikers for keeping them competitive, as can shot-shy Fleetwood.

Leaders Portsmouth and third-placed Sunderland can both thank stubborn defences for absorbing plenty of the shots that they have to deal with, although Peterborough‘s have been among the most hard-working. Despite allowing relatively few attempts at their goal, the likes of Burton and Oxford have struggled to keep the ball out of their net.

When we adjust for shot quality, the trio of Portsmouth, Barnsley and Luton stand out as the best performers. Where it gets really strange is that the three next best – Shrewsbury, Burton and Bristol Rovers – are all in the bottom half at present, so I’m wondering whether all three will rise upwards before the end of the campaign. Fleetwood really need to do something about the quality of chances they’re creating, as they’re some way off the rest of the division as it stands.