It was a good month for the West Midlands, with four Birmingham and three Aston Villa players making the top-scoring squad, including both goalkeepers and three of the five defenders. The top-scoring player however was from Yorkshire: Hull‘s Jarrod Bowen was instrumental in their strong showing, netting six goals and setting up another two, although he lost a few points for failing to convert a penalty against Swansea.

Despite Brentford‘s recent dip in fortunes, Neal Maupay remains the top-scoring player in the division to date, narrowly ahead of West Brom‘s Harvey Barnes. Middlesbrough have the most representatives with three, and it’s not surprising that all are defensively-minded. Birmingham, Leeds and Nottingham Forest are the only other clubs with more than one player in the best squad so far. 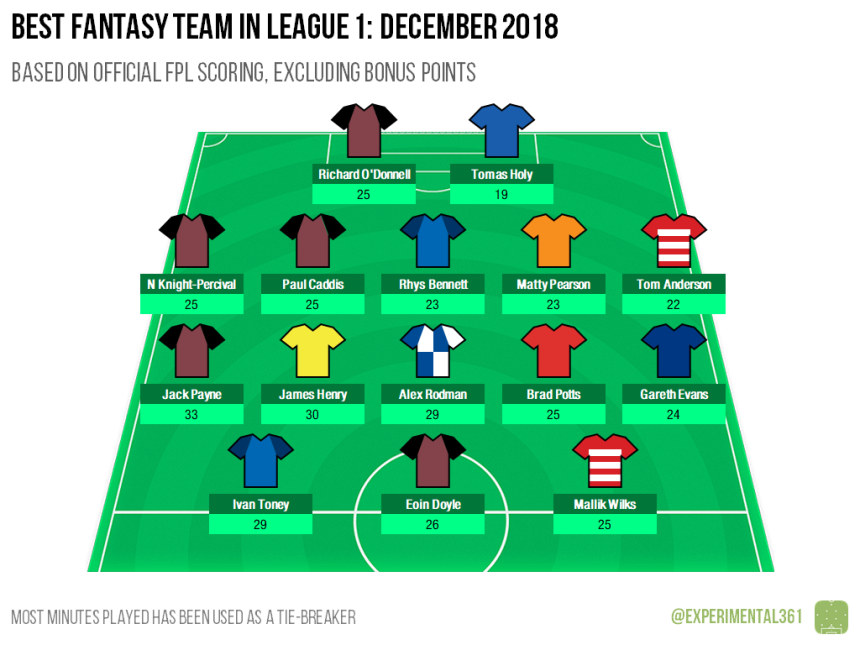 A fantastic month for Bradford sees them contribute a whopping five players to the squad of the month for December, including the top-scoring player in Jack Payne. Three goals and two assists from midfield, plus a point apiece for the Bantams’ three clean sheets saw the Huddersfield loanee top the charts. Doncaster and Peterborough were the only other clubs who had more than one player make the cut.

There are three players each from Barnsley and Portsmouth in the team of the season so far, plus a pair each from Blackpool and Luton – all four of whom are defensive. However the top-scoring player of all is Rochdale striker Ian Henderson who has 13 goals plus five assists to his name so far and has been a virtual ever-present.

Four teams each contribute a pair of players to the squad of the month: the promotion-challenging trio of Carlisle Colchester and Exeter, plus a resurgent Grimsby. The Cumbrians’ veteran full back Danny Grainger leads the way with three goals and an assist from defence, edging out team-mate Hallam Hope.

Just like Middlesbrough in the Championship, MK Dons have three players in the team of the season so far and they’re all defensive. Colchester, Exeter and Tranmere each have a pair of representatives, with the latter’s including the overall top-scoring player James Norwood who has 16 goals and an assist to his name.