Continuing the splurge of roughly-halfway-through-the-season graphics, here’s a summary and a club-by-club breakdown of how each club has used their squad.

It’s sorted by how many different players each club has used (with the number who started a match used as a tie-breaker), but also shows the average number of changes to their starting XI, the number of minutes played by their most-used combination of players so far and how many unchanged line-ups they’ve named. This all applies to league matches only. 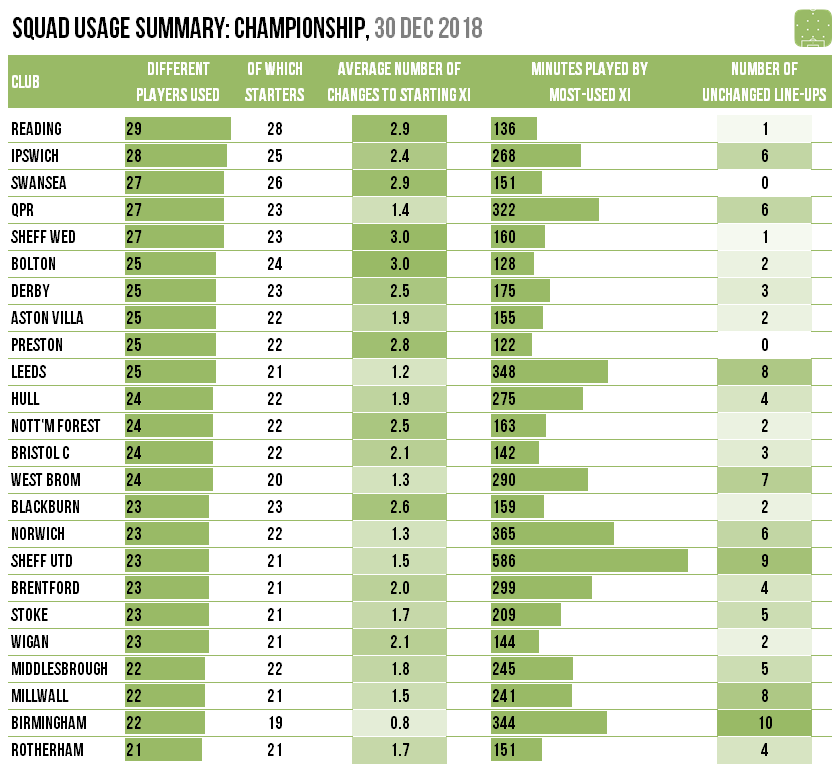 Struggling Reading have already used 29 different players this season, handing starts to all but one of them and naming just one unchanged starting line-up. Rotherham are a model of consistency by comparison with just 21 players used, while Birmingham have fielded just 19 different starters and named 10 unchanged XIs (the most in the division). Only two clubs – Swansea and Preston – have yet to name a single unchanged line-up, while the 586 minutes that Sheffield United‘s most-used combination of players have been on the pitch together is the longest in the division.

What I’ve done for every club below is to plot out their league campaign minute-by-minute and then shade in a bar for each player showing when they were on the pitch. The players’ bars are then laid out next to each other, in descending order of how long each spent on the pitch this season (also shown as a percentage of the club’s total playing minutes), to allow for comparisons.

I’ve also factored in a calculation of what each club’s most-used combination of 11 players was and shaded the minutes that they were on the pitch together using a darker colour. At the top I’ve also included the total number of minutes that they featured alongside each other, which is often surprisingly low.

To make reading across the graphics easier, I’ve drawn vertical lines separating each match and each month, plus horizontal ones between each player’s row and beneath the 11 most-used players. 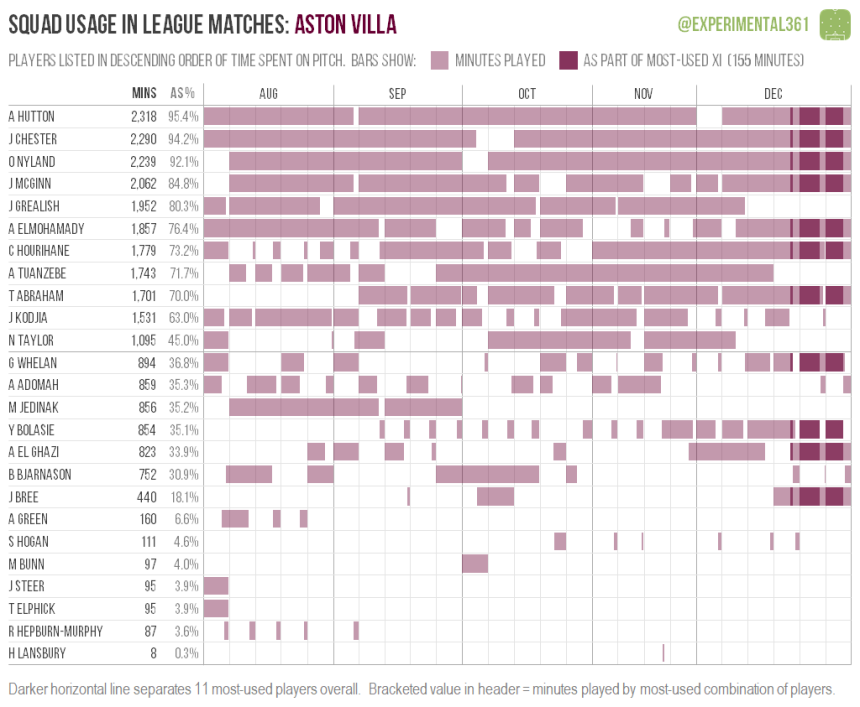 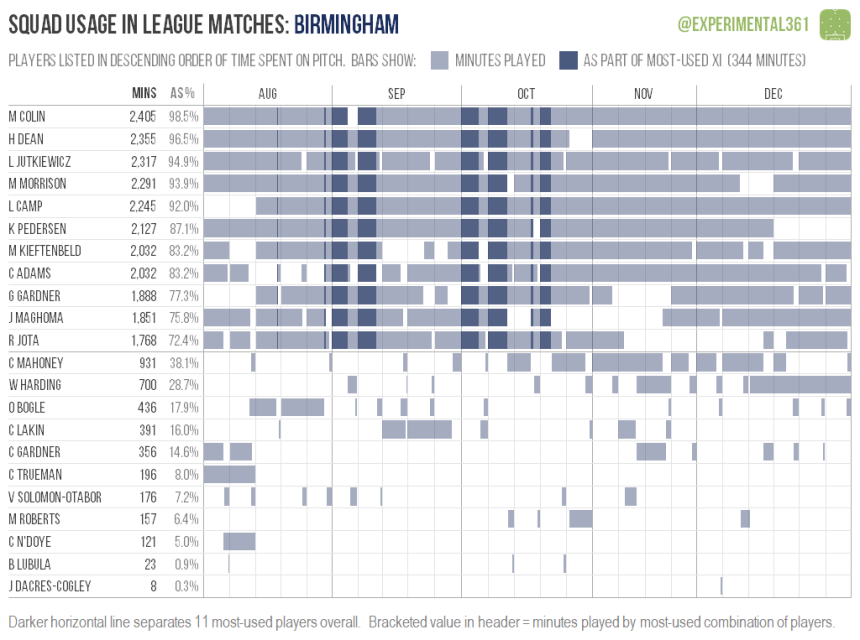 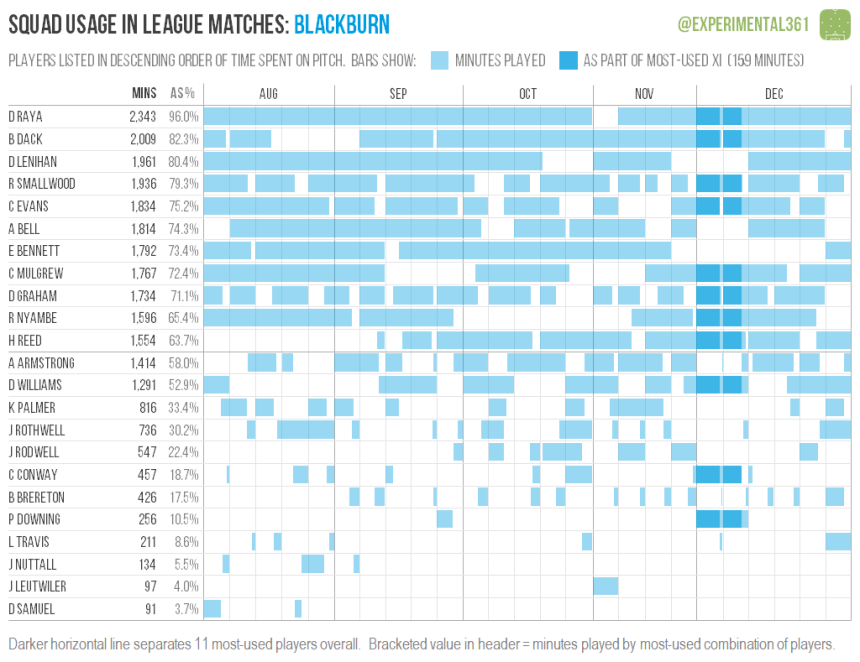 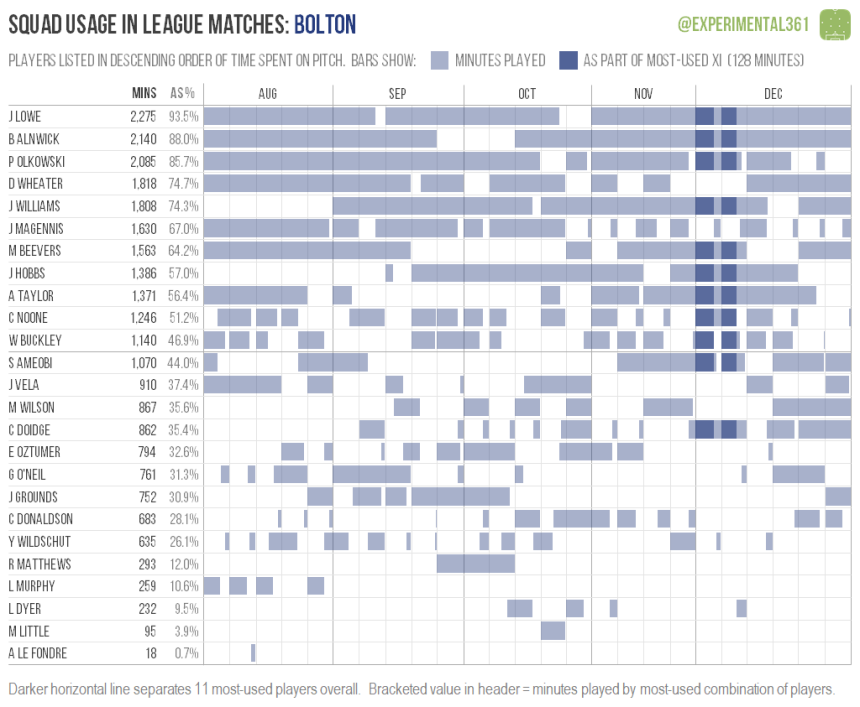 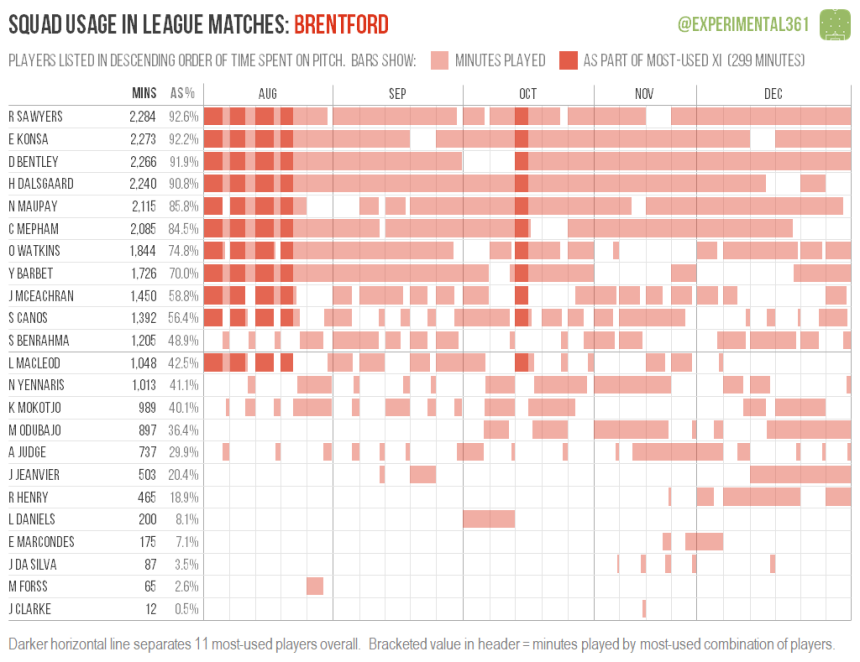 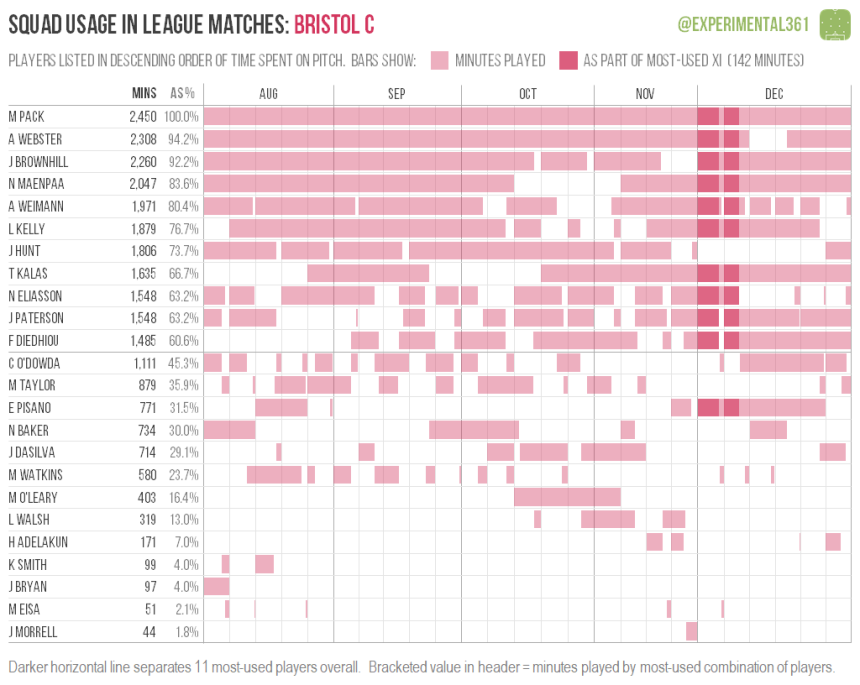 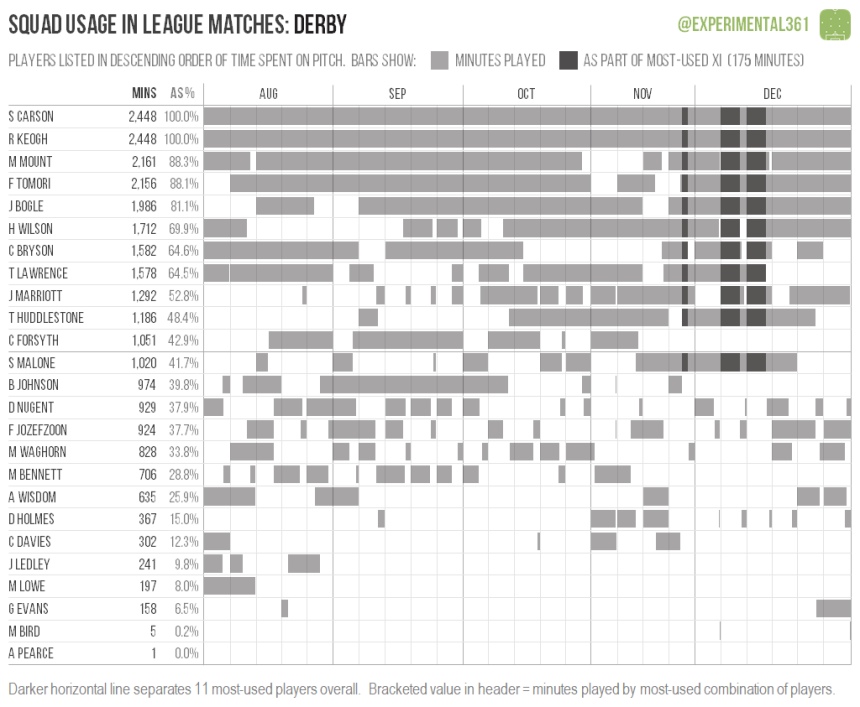 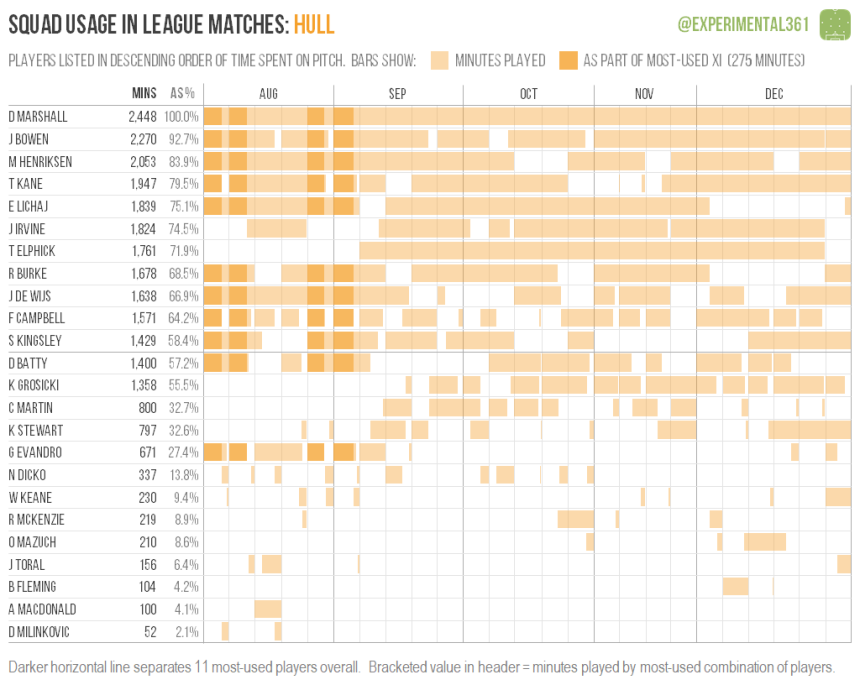 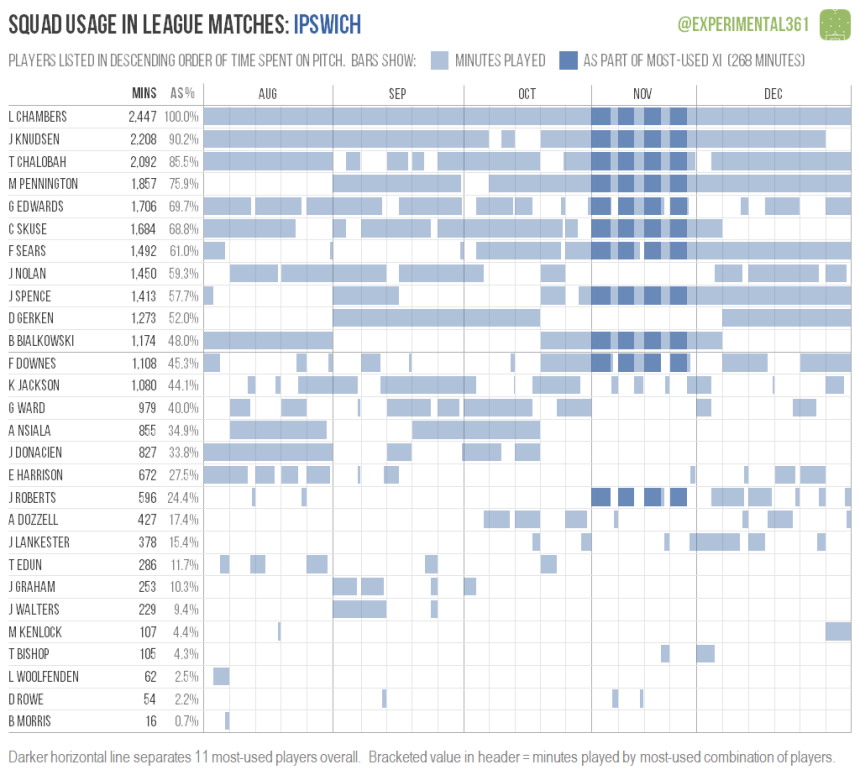 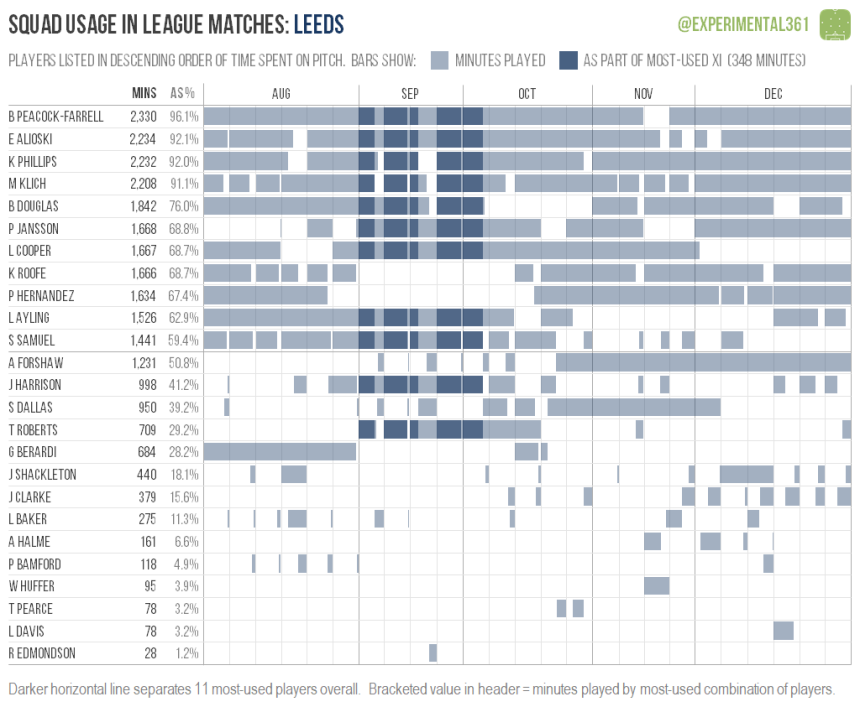 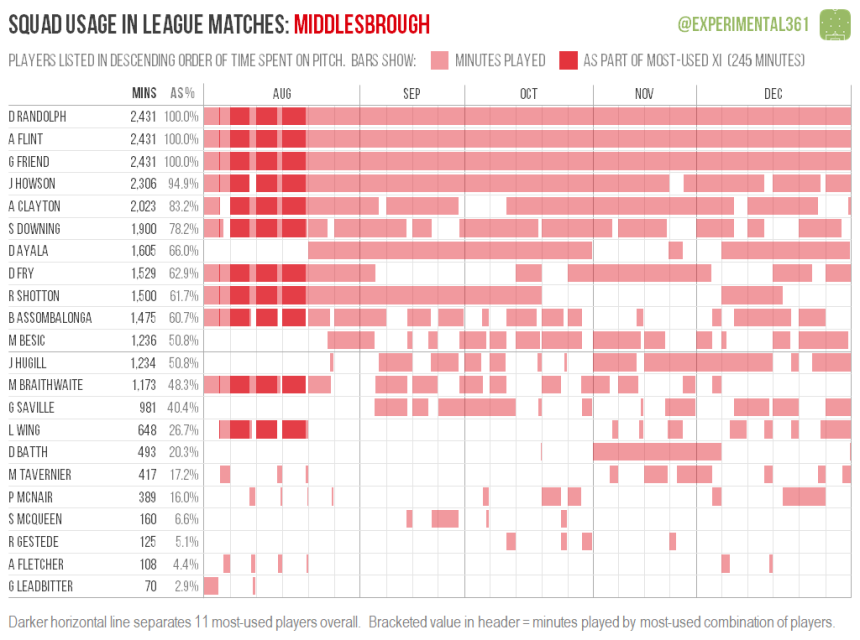 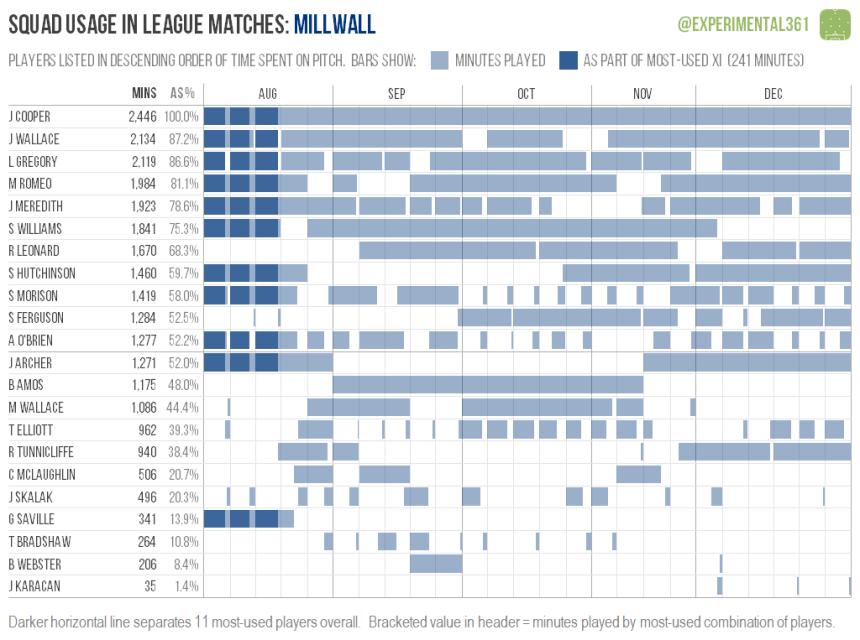 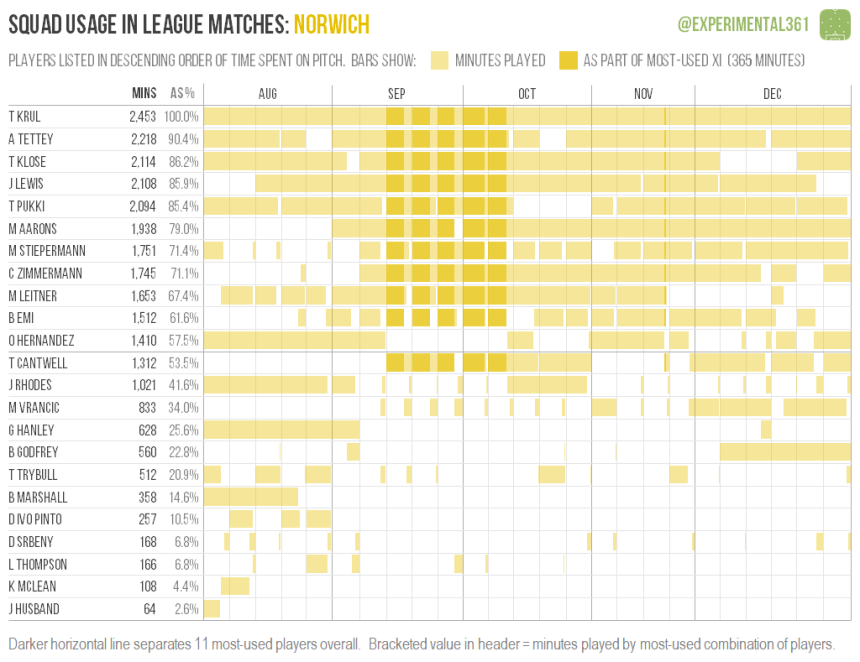 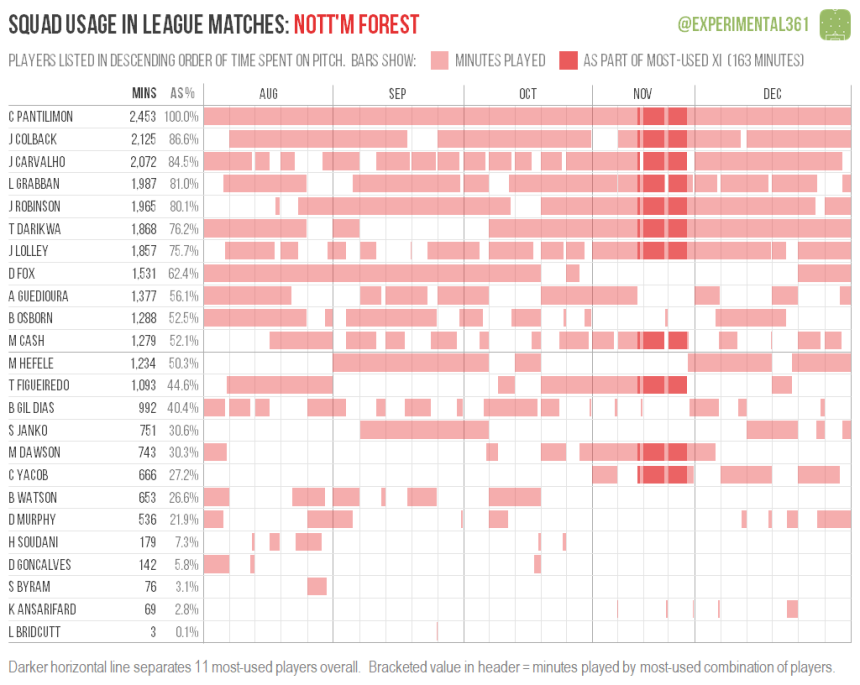 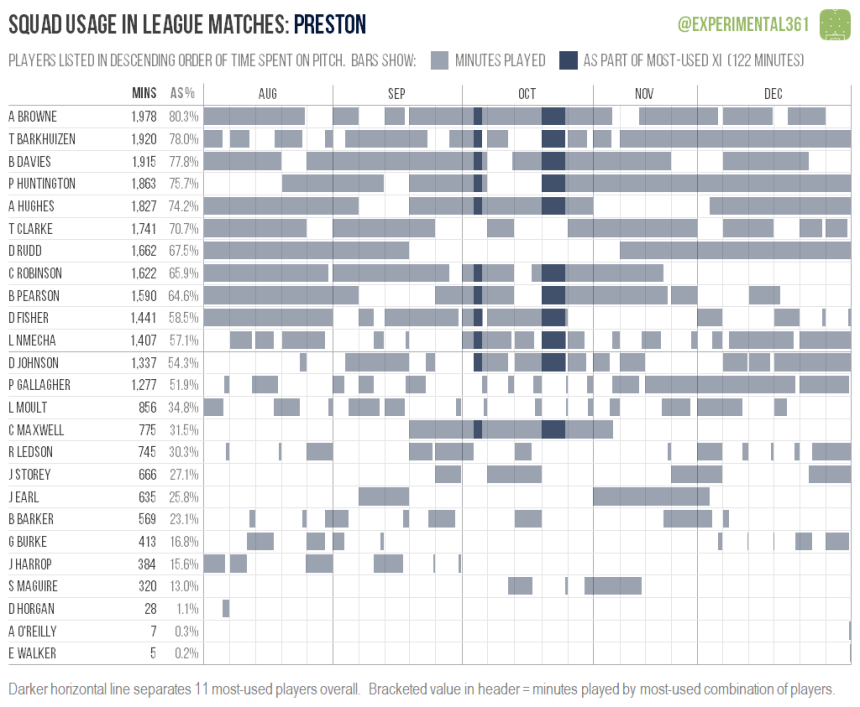 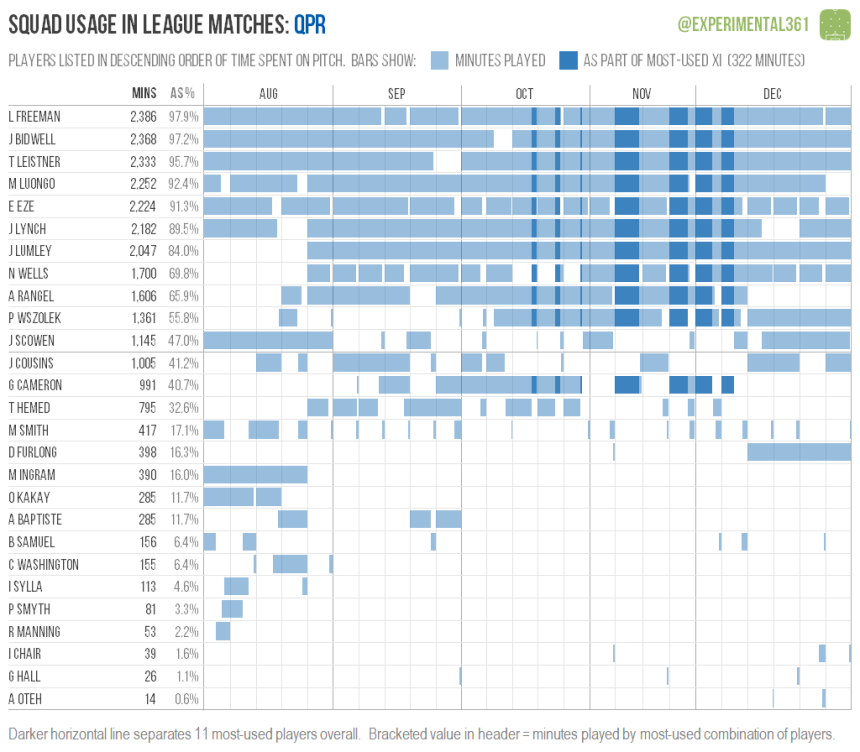 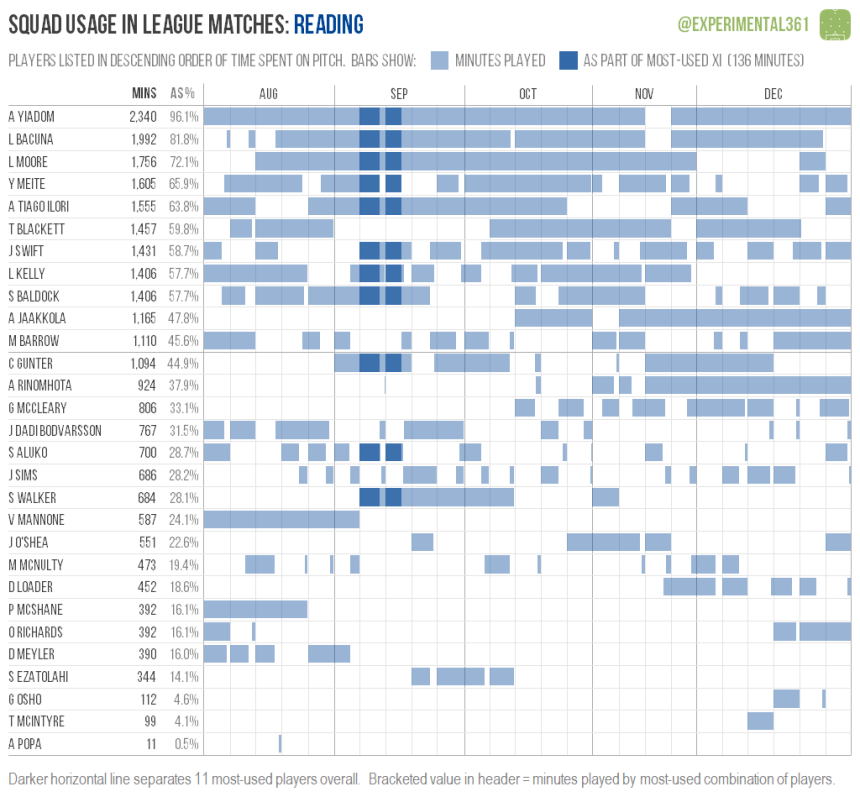 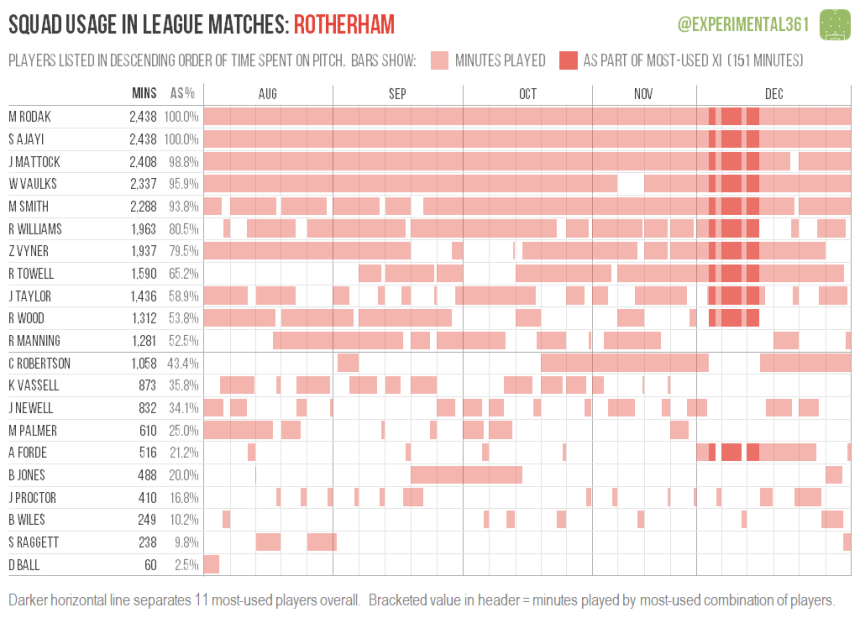 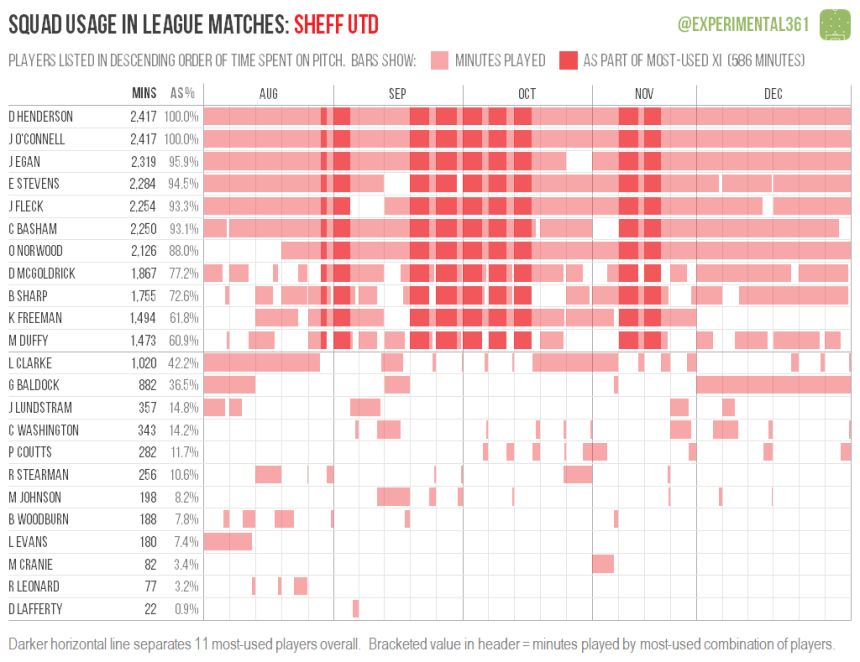 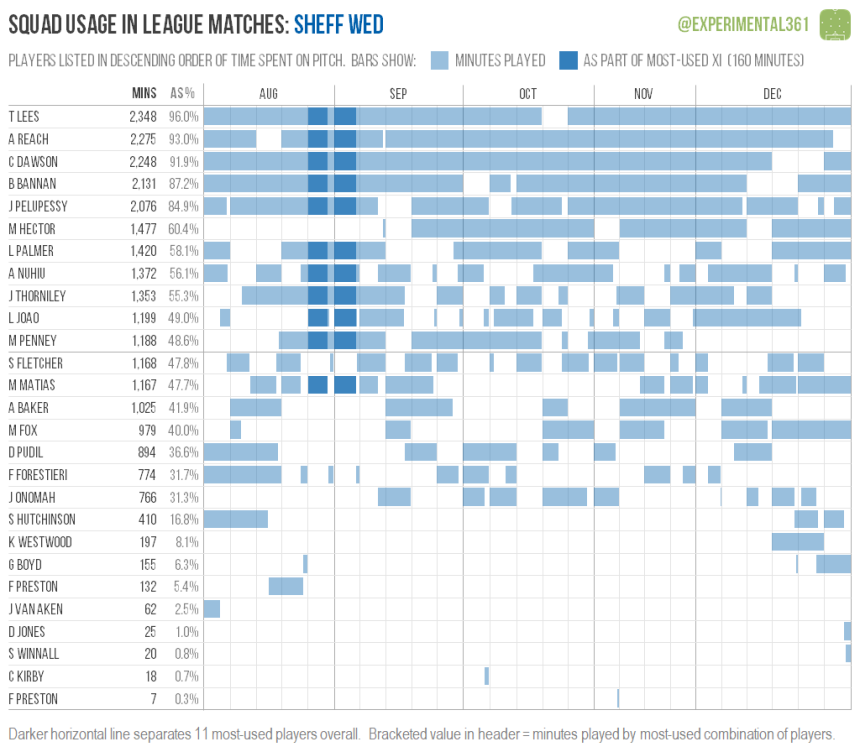 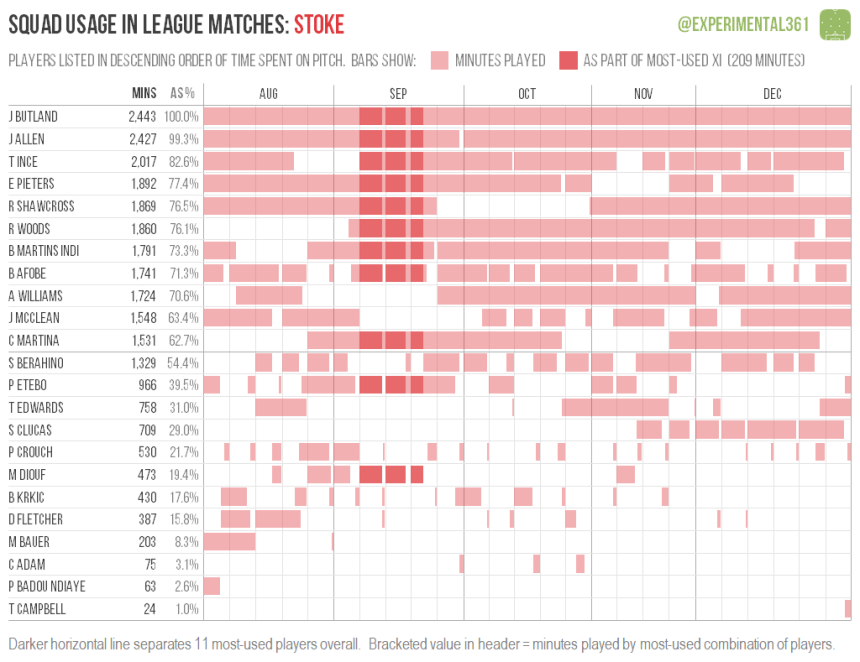 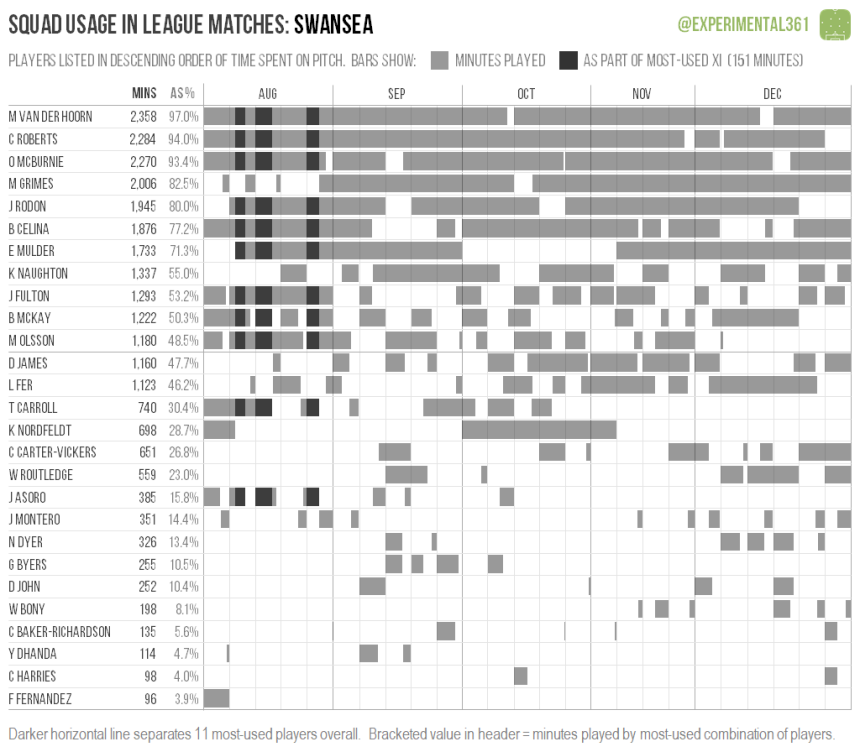 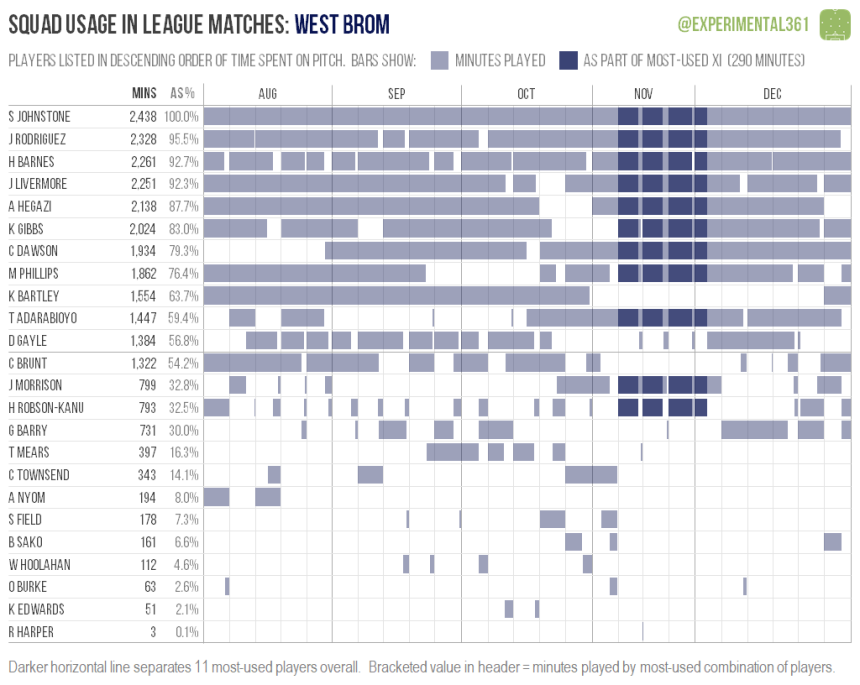 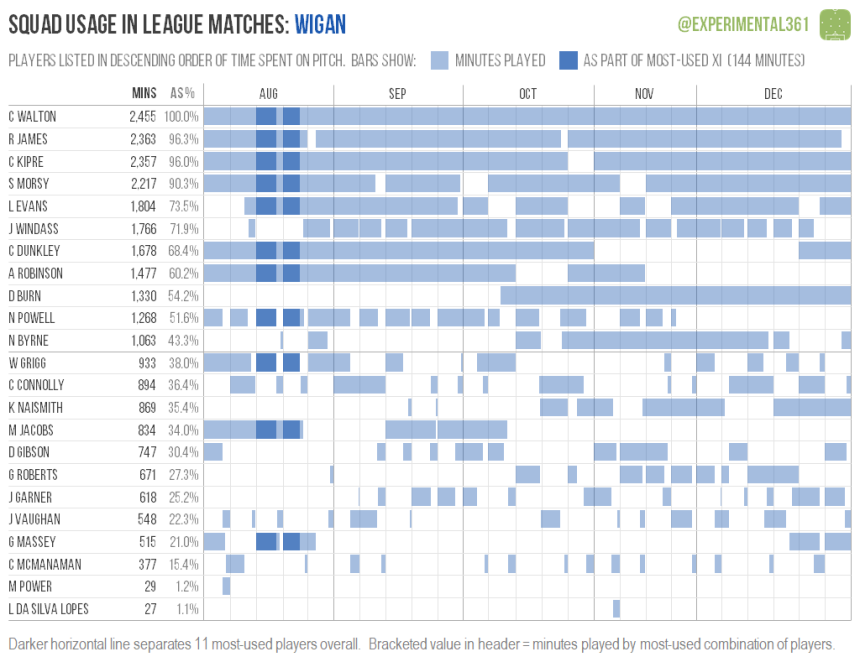