As we’re approaching the business end of the season, a single match can often have a huge impact on the fortunes of the teams involved. I’ve therefore switched back on a feature from last year where I’ve used the ratings model to identify this weekend’s most pivotal fixtures. This is done by simulating the rest of the season and seeing whose fate changes the most when their match ends in a home win, a draw or an away win.

Below I’ve picked out the five matches where the most appears to be at stake for both teams, assuming the rest of the season plays out as the model expects. The actual numbers we’ll see after the weekend won’t be exactly the same as the ones shown here as some of the other fixtures being played this weekend won’t go the way the model predicts. Therefore you can think of these as the model’s best estimate of each match’s impact.

You probably don’t need data analysis to work out that this is going to be a pivotal match in the Championship promotion race, but it’s worth trying to quantify its impact anyway. Leeds are two points clear of the Blades at the moment and a home win would raise their chances of automatic promotion close to 90% while putting a huge dent in their visitors’ prospects. However an away victory would move Chris Wilder’s side ahead in the reckoning, giving them a two in three chance of automatic promotion while Leeds’ would drop to roughly 50:50. The model ranks these two as the best-performing sides in the division, but unless an irrepressible Norwich stumble then one of them will have to navigate the play-offs.

The model still quite likes Oxford as their performances have remained relatively mid-table-y despite their poor form, so even a Bradford win would leave the hosts likelier than not to escape the drop. However a home victory would be both a huge stride towards securing their safety and a hammer blow to the Bantams’ own survival hopes, so this match will surely be fiercely contested. This will be an intriguing encounter as the hosts’ declining attack is up against one of the division’s loosest defences while the visitors’ relatively respectable front line has to find a way past a rearguard which has allowed relatively few shots despite its frustrating leakiness.

The first of three high-stakes encounters that the model has identified in the fourth tier this weekend pits two promotion hopefuls against each other in a match that both will be desperate not to lose. While defeat wouldn’t be cataclysmic for either club, it would pretty much halve their chances of a top seven finish compared to winning the game, so that’s plenty of pressure. Colchester still have four matches remaining against teams above them, so could really do with taking something from this game.

Moving straight on to another pivotal battle in the play-off race where there’s even more at stake, the fate of these two teams will be pretty much mirrored whatever the outcome of this match. If Forest Green win, their chances of finishing in the top seven should rise to around three in four while Carlisle’s would drop to one in four. An away win however would move the Cumbrians up to roughly a two in three chance while slashing their hosts’ prospects to around one in three. Both have been in poor form lately but performances haven’t been anywhere near as bad, so this should be an entertaining match. 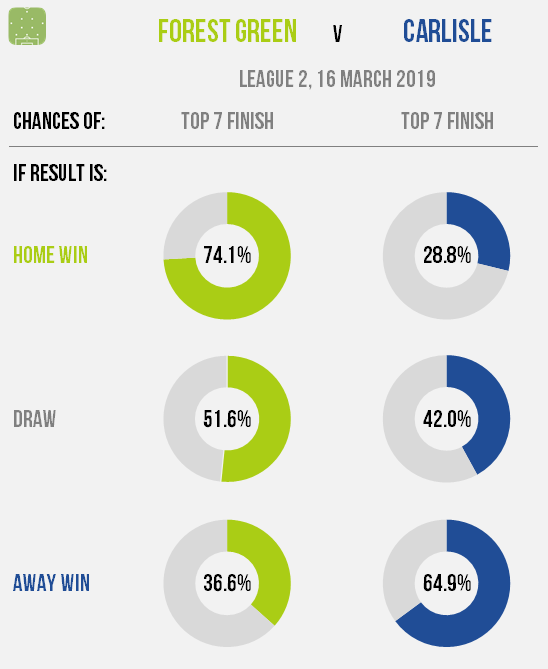 There’s also a six-pointer near the foot of the table this weekend as Yeovil host Macclesfield. While both sides are in poor form the Silkmen’s plight is the more desperate: even a win here would leave them slightly likelier to go down than survive, but defeat – or even a draw – is likely to leave them staring relegation in the face. Even a draw would edge the Glovers to around a two in three chance of survival but they can’t afford to be complacent, as this is their last match against a fellow bottom six side and losing it would mean that they too would be more likely to drop into the National League than retain their EFL status. 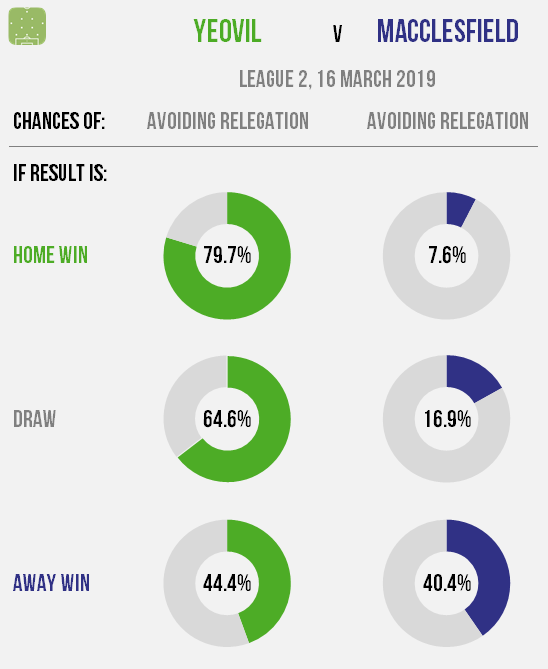