As is traditional, following the final summer transfer deadline yesterday I’ve created final versions of the squad churn graphics that I’ve been tweeting out over the past month or so. I’ve harvested the data from the official retained lists, the BBC transfer page, Transfermarkt and a variety of Twitter sources, so hopefully I haven’t missed anything. You can see the all the data I’ve compiled here – please let me know via Twitter if you think I’ve gotten anything wrong.

A pattern which persists over time is that the higher up you are in the pecking order, the less your squad tends to changes from season-to-season. This seems to make sense as the top clubs will have more control over which players depart and when. What it means in practice is that these graphics will get more varied the further you scroll down.

Most Premier League squads are largely unchanged, which is fairly normal, and Liverpool were the least changed of all having lost just 743 of last season’s league minutes in the form of fringe players Daniel Sturridge, Alberto Moreno and Rafael Camacho. Promoted Aston Villa‘s well-documented summer spending spree has seen almost 40% of last season’s minutes leave the club, while there’s also been a fairly sizeable clear-out (of mostly backup players) at Arsenal. 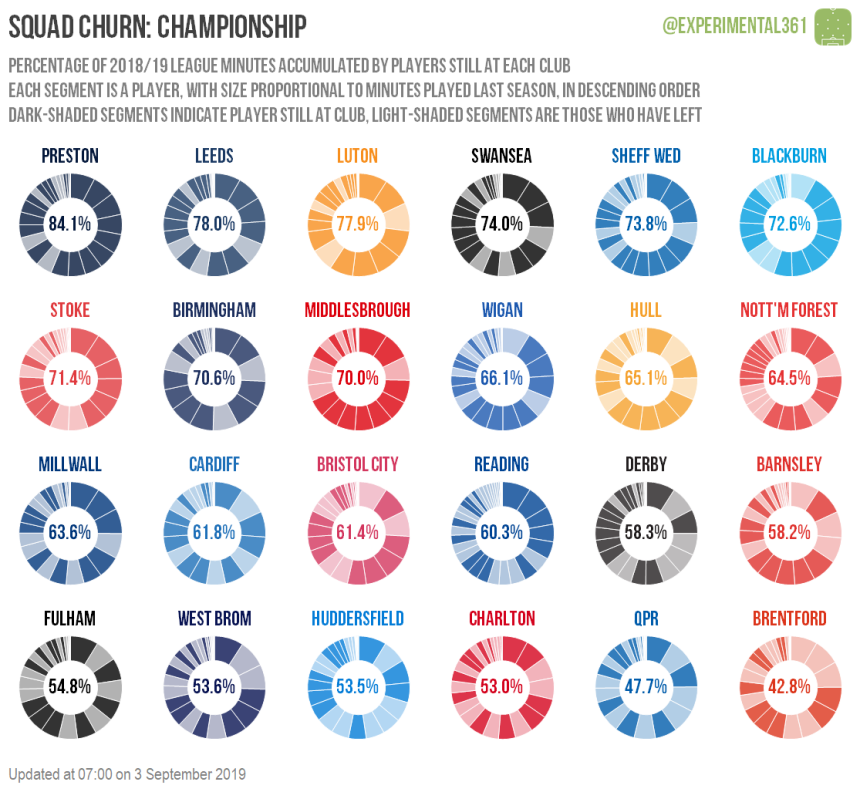 Preston are the least-changed side in the second tier with Callum Robinson and Lukas Nmecha the only first-team regulars from last season to depart. Fears of a fire sale at Leeds were also largely unfounded, while Luton appear to be keeping the faith with the players that got them promoted. Meanwhile it’s all change at Brentford who lost their three most-used players from last term – two of them to Premier League clubs.

Unfortunately we’re down to 23 clubs here for obvious reasons. We can see a dramatic increase in squad churn compared to the division above, with the entire bottom row here losing more minutes than the most-changed club in the Championship. Bolton‘s financial crisis over the summer saw their percentage plunge even lower than this, but following their takeover they were able to re-sign a few of last season’s players late in the window. At the top of the graphic, Lincoln and MK Dons have both retained the nucleus of their promotion-winning squad together, while at the bottom Doncaster and Coventry – who both missed out on the play-offs last term – have rolled the dice. 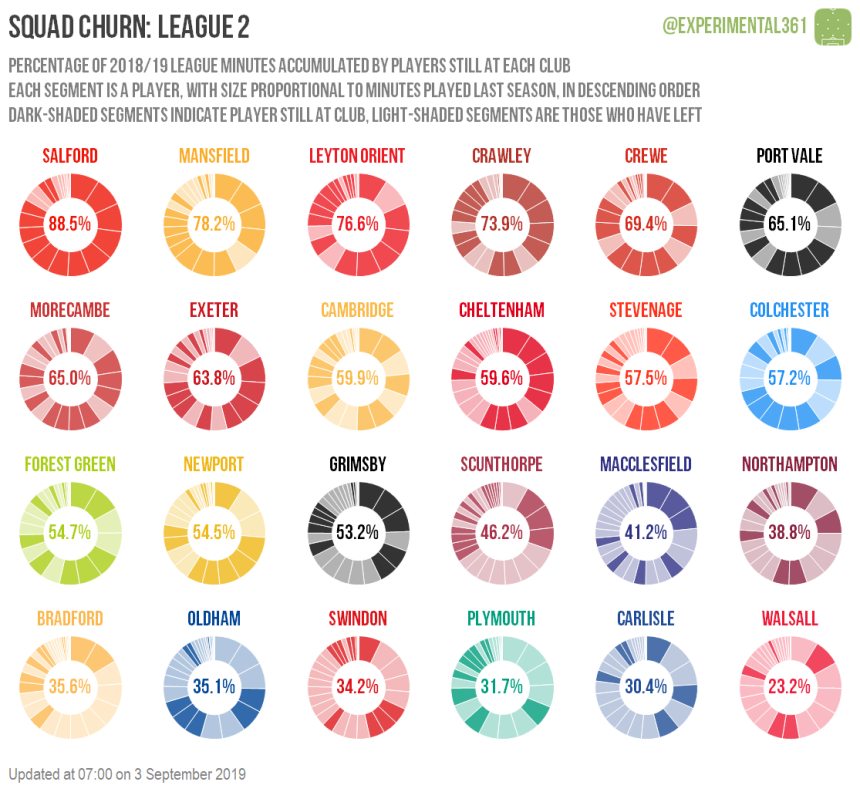 Again we see the promoted clubs choosing – and being able – to retain most of their players from last season, with both Salford and Leyton Orient among the three sides with the least churn over the summer. Salford are actually the only EFL side still able to call upon all of their 11 most-used players from 2018/19. There’s some neat symmetry in two of the teams relegated from League 1 being among the three most-changed, with Walsall having lost even more of last season’s minutes than Bolton in the division above.