As it’s been a month since the last batch, it feels worth updating the scatter graphics. These compare the attacking and defensive performances of every team in a division – each of the four graphics is explained briefly below and at length here.

Crawley stand out as a team that really loves to shoot: they’ve taken over two more shots per game than anyone else and almost five more than the average side, which is unusual for a team in the bottom half of the table. Two of the current top three – Forest Green and Swindon – have created among the fewest chances in the division (although the Robins have also allowed the fewest), so maybe it’s more about quality than quantity. 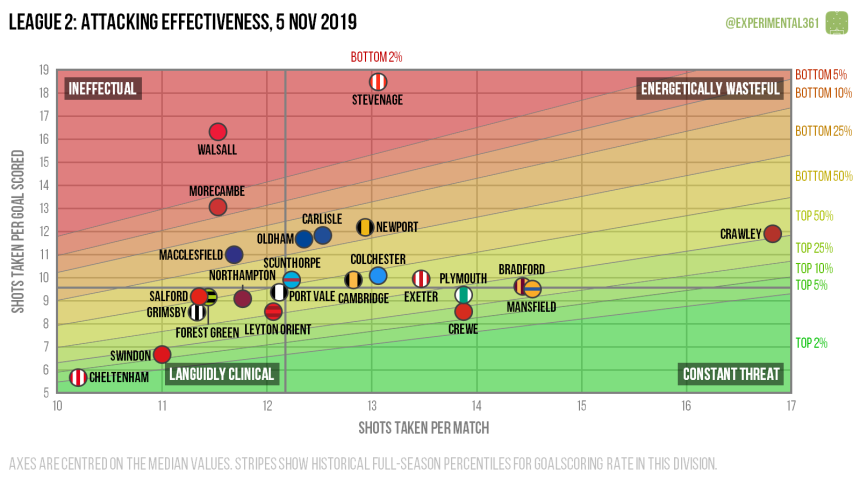 The current bottom three have struggled in front of goal so far, with Stevenage and Walsall in particular having very little luck in converting their chances. Swindon and Cheltenham are the two quietest attacks in the division but both are sustaining promotion challenges thanks to ruthless finishing. 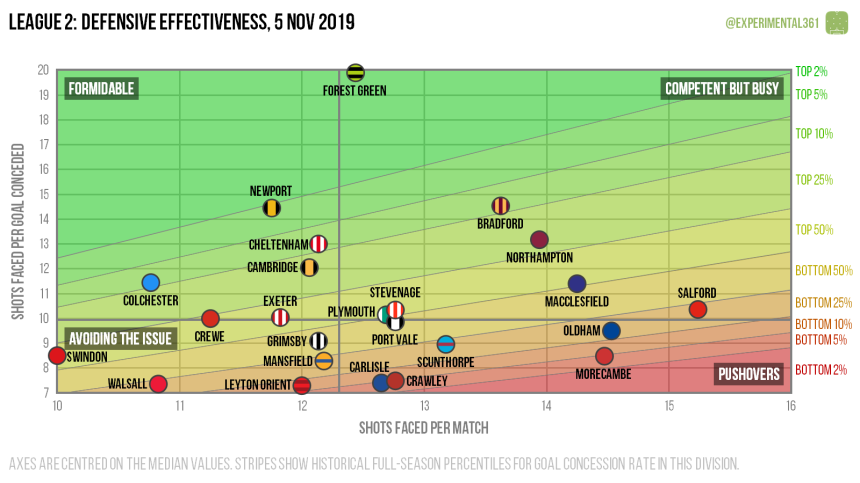 A robust defence has been a huge part of Forest Green’s success so far, but the rate at which they’re keeping shots out looks suspiciously high and is likely to drop as the season progresses. Struggling Walsall have allowed the third fewest attempts at their goal – far fewer than their fellow relegation battlers – but having one of the leakiest defences (on top of their wasteful attack) is keeping them near the foot of the table.

Forest Green are still in the opposite corner to the one you’d normally find the league leaders in, but they’ve moved in the right direction since last month. Newport are currently on the outer edge of the play-off picture but shouldn’t be written off as title contenders: they have narrowly the best all-round performance in the division so far. Cambridge and Colchester also look capable of a promotion challenge.