As we’re roughly at the halfway stage of the season, it feels worth updating the scatter graphics. These compare the attacking and defensive performances of every team in a division – each of the four graphics is explained briefly below and at length here.

Bolton’s position is still skewed by their awful start, but their record continues to improve. Doncaster have been the most shot-happy team in the division, taking around a shot and a half per game more than anyone else and around three and a half more than the average side. The top two of Wycombe and Ipswich look relatively average here, but one of the other graphs shows how they’re doing so well. 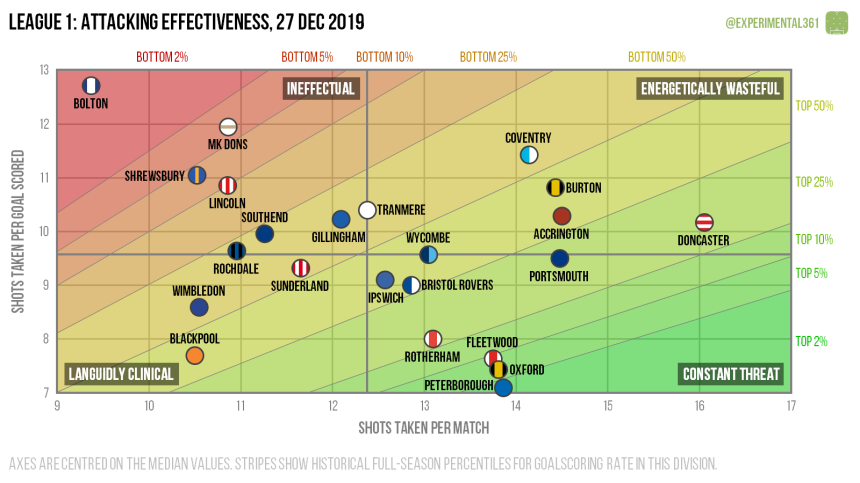 Despite creating the second fewest chances per match so far, Blackpool have some clinical finishing to thank for keeping them competitive. The higher-volume shooters fall into two rough groups at the moment: those like Coventry and Burton who take a lot of shots but are a bit wasteful, and those like Peterborough and Oxford who don’t take quite as many but are absolutely ruthless.

The top two of Ipswich and Wycombe may not create that many chances, but it’s been really tough to break either of them down. The bottom six are all struggling defensively to some extent, spread across the right half of the graphic. Southend have really struggled to keep the ball out of their net: despite allowing around one fewer shot per match than MK Dons they’ve conceded nearly twice as frequently.

When we adjust for shot quality the bottom six are again adrift of the rest, with Southend and Bolton in the most trouble and Tranmere the closest to redemption. Despite their poor start, Portsmouth look to be the best all-round performers, with Oxford perhaps edging second place in what looks set to be an unusually close promotion race this season.