Now that the final league game of 2020 has been played, it seems only fitting to continue the tradition of cranking out a combined calendar year table for the Premier League and EFL clubs.

This is pretty simple really – all I’ve done is to calculate one massive league table sorted in descending order of points, then goal difference and then goals scored. The difference is that I’ve calculated them all on a ‘per match’ basis to adjust fairly for the different numbers of matches played, which seems all the more relevant this year with so many games having been postponed or cancelled.

I’ve only included league matches (no cups or play-offs) and I’ve included some colour-coding for each club’s current division. For clubs who were promoted or relegated I’ve rolled their record from both divisions together, including National League games for the two newly-promoted clubs in League 2.

I’ve not included points deductions as that would just makes things messy (I’d have to come up with some way of apportioning them, as they apply to seasons rather than calendar years).

Liverpool are unsurprisingly top, but they’re some way short of their 2019 performance when they won 31 out of 37 league games and only lost once. However despite three additional defeats this year they still have the highest win percentage (65.7%).

Manchester City are second best for the second year running but were more effective than the Reds at both ends of the pitch, scoring the most goals per game (2.16) and tied with both Portsmouth and Sunderland for the best defensive record of just 0.75 goals conceded per game. All three played 32 league games and conceded just 24 goals, although Pep Guardiola’s side scored 17 more than Pompey and 25 more than the Black Cats.

Despite frequent rumblings of discontent, their neighbours Manchester United had the third best league record this year and ran City much closer than in 2019 when they finished 13th. The Red Devils actually lost a smaller share of matches: both clubs were defeated six times but United played one more game thanks to City’s COVID outbreak cancelling their match with Everton.

It’s not been a great year for fans of the Sheffield clubs – or a few other teams beginning with ‘S’ for that matter. Only Stevenage had a worse ‘per game’ record than Sheffield United this year and the Blades lost the highest proportion of matches (21 out of 34, or 61.8%). This is a massive drop from the 2019 table (link at the bottom of this post) where Chris Wilder’s side ranked fourth overall after finding their feet quickly after promotion.

There were seven other clubs who lost more than half of their league matches in 2020, with neighbours Sheffield Wednesday among them. The two clubs are separated by Southend in the bottom four, but interestingly another of those sides is Hull who are 18 places off the bottom of our giant table.

The reason for this is that the Tigers only drew four league games all year – both the smallest number and proportion of any side in this table during 2020 – and mustered 13 wins. At the other end of the scale, Brighton fans saw almost half of their team’s Premier League games (47.1%) end in stalemate. If Arsenal hadn’t edged their contest on Tuesday night it would have been a round 50%.

Meanwhile Millwall are only club in this table whose league matches featured fewer than two goals on average: 81 in 41 this year. The team whose games saw the most goals (edging Liverpool) was Burton with an average of 3.44, although exactly two per match were scored by their opponents (68 to the Brewers’ 49 in 34 matches).

To end on a positive, there were a few clubs who enjoyed a far better 2020 than 2019 (on the pitch at least). Stoke were 88th last time around but now rank 17th, while Walsall rose from 86th to 28th. Two other teams also rose at least 50 places this year: Southampton went from 68th to 16th and Carlisle from 70th to 20th.

In case anyone can’t read that single tall graphic on their phone, I’ve also broken it up into four sections – the top 20 and then three further ‘divisions’ of 24, to mirror the actual league structure: 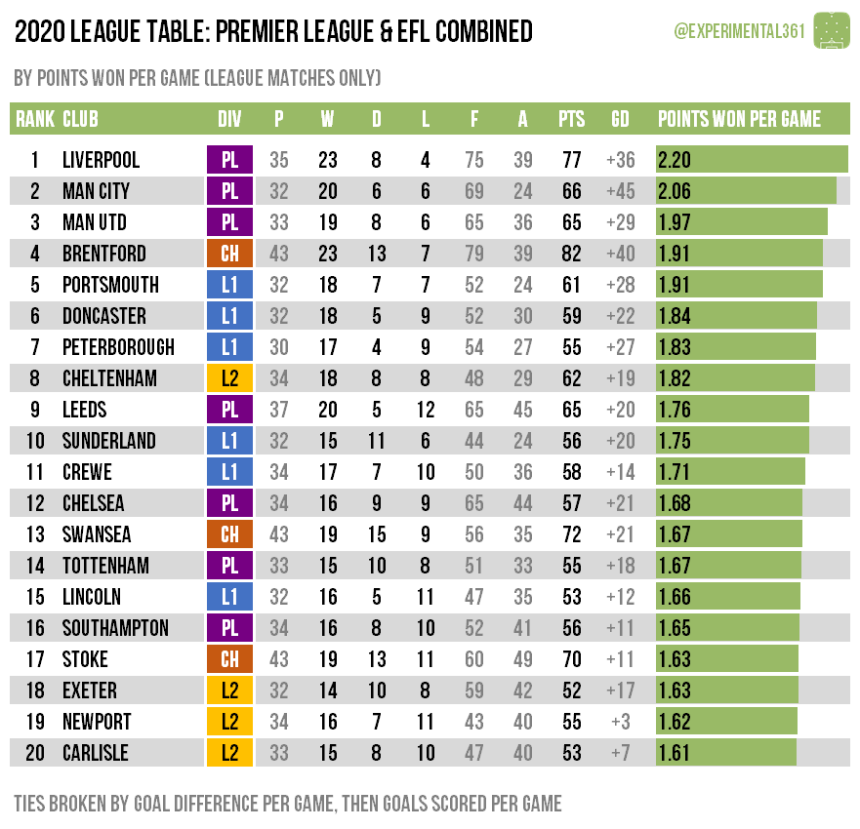 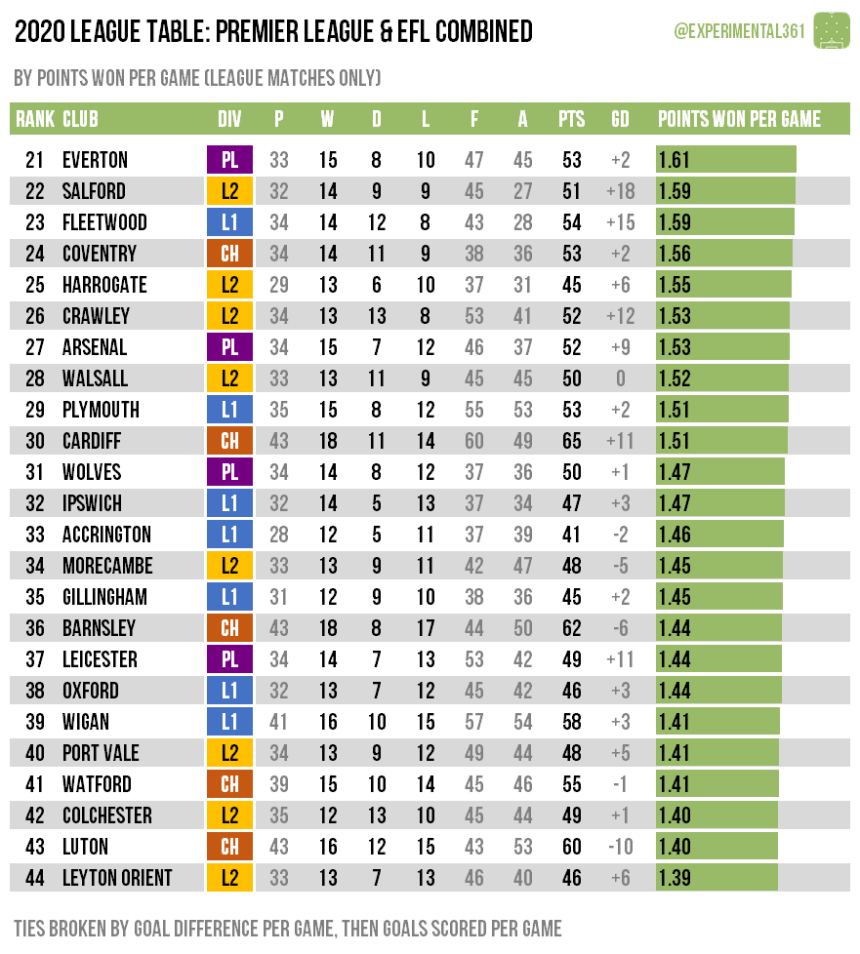 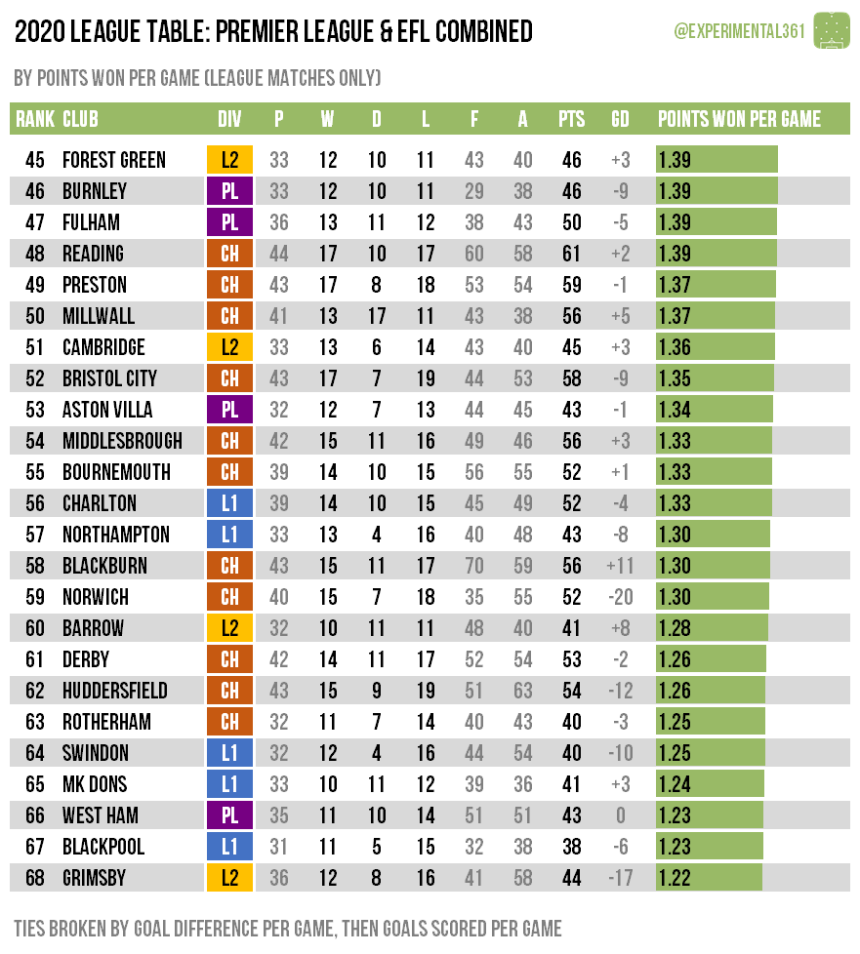 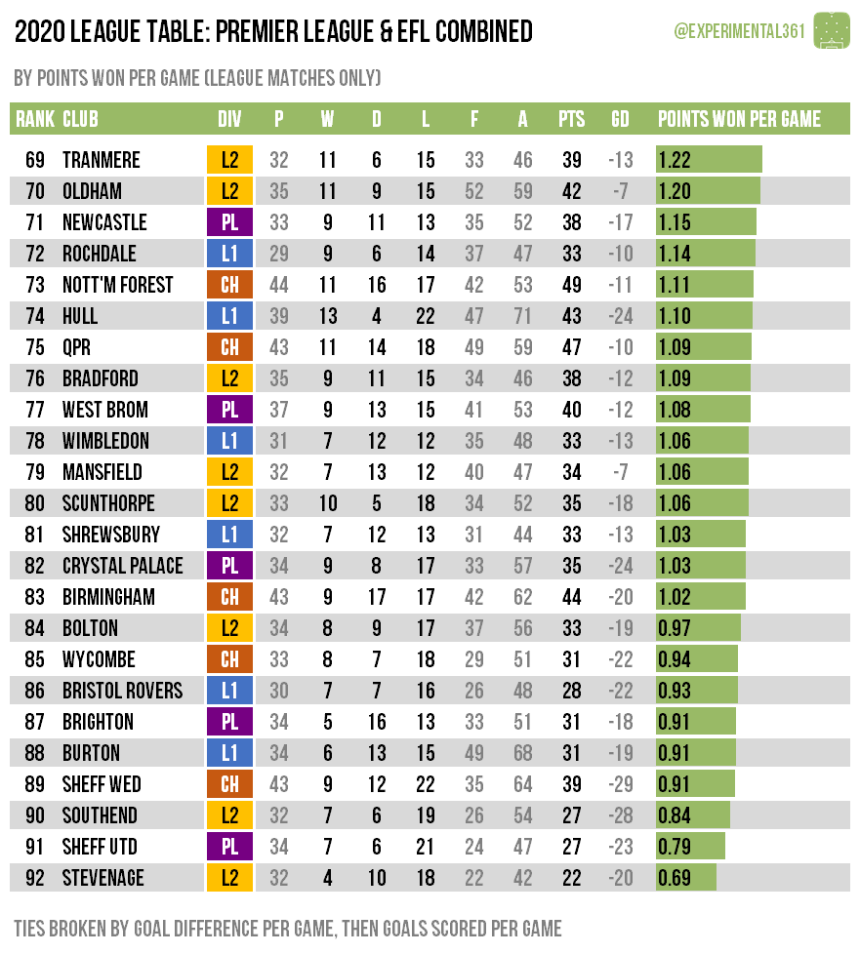