It’s been a long time since I updated the long-term trend graphics and I thought it was also worth giving them an upgrade. The previous versions are explained in full here (and below) but this time around I’ve added two additional charts and formatted them to fit a phone screen like I did with the recent squad graphics.

These are adapted from a very similar design by the excellent Swedish blogger Zorba138 intended to track a club’s long-term performance and also where they’ve been under or over-achieving based on the quality of chances created in their matches.

There are three charts:

Previously I only produced the overall chart, but as this combines the attacking and defensive data it wasn’t always clear what was driving the trends and differences.

Each chart has two lines:

Comparing these two allows us to see how a club’s performances have changed over time and whether there were any interesting differences between chances created and goals scored.

Each chart is shaded as follows:

Over the long term we’d expect the two lines to converge unless there’s a significant difference in a club’s attacking or defensive skill compared to the average for the division (or perhaps that my data doesn’t pick up something unusual that they’re doing). We can’t tell from the data alone whether skill or luck is the cause, but the longer a difference persists the more I’d suspect the former.

I’ve also indicated on the charts when a new manager has taken over (using a dark dashed line) as this can provide useful context. I’ve included caretakers in this, as in some cases there was a significant gap between one permanent manager leaving and another being appointed.

Let’s take Swansea as an example because something really fun is going on over there. This season it looks like their expected goal difference this season has been deteriorating for quite a while and this looks to be driven by their attack cooling off. However their defence has been compensating for this by hugely overachieving on an already-impressive performance and this doesn’t seem to be slowing down. In their last 10 games they’ve been outscoring their opponents by about a goal on average despite allowing roughly half a goal’s worth of chances more than they’ve been creating. This has been happening for long enough that I’m wondering if they’re setting up their defence in a way that opponents haven’t been able to figure out. 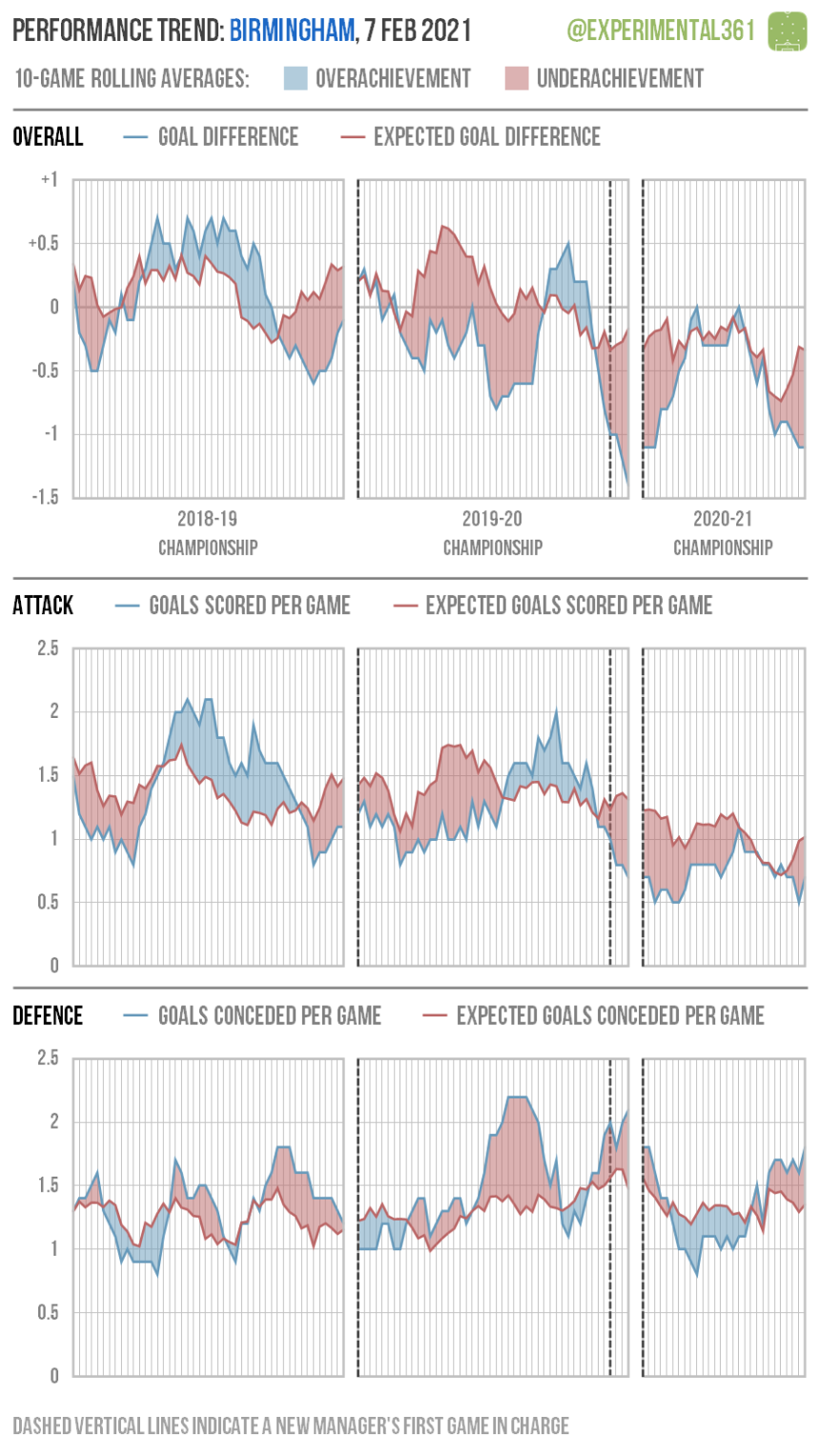 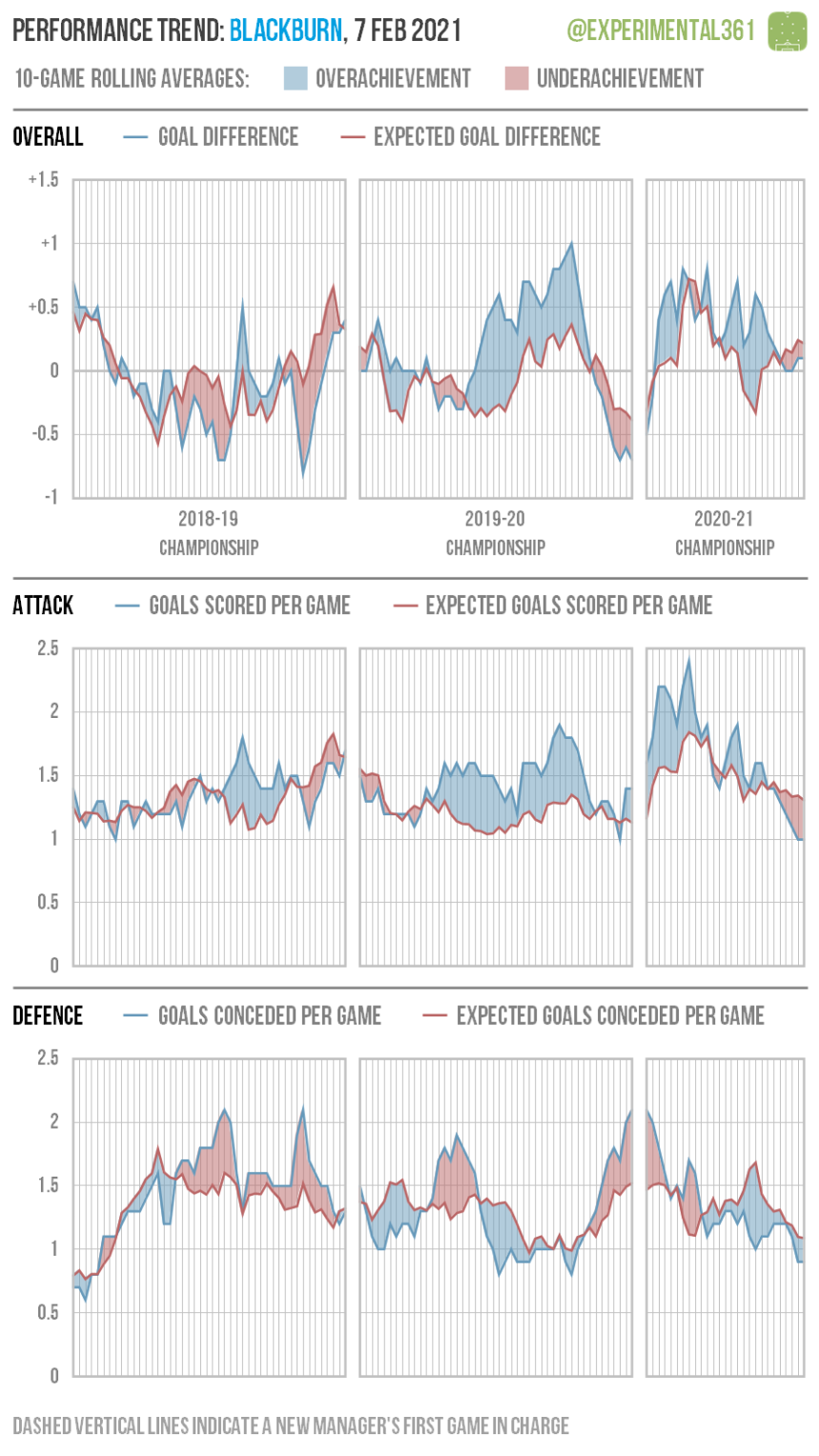 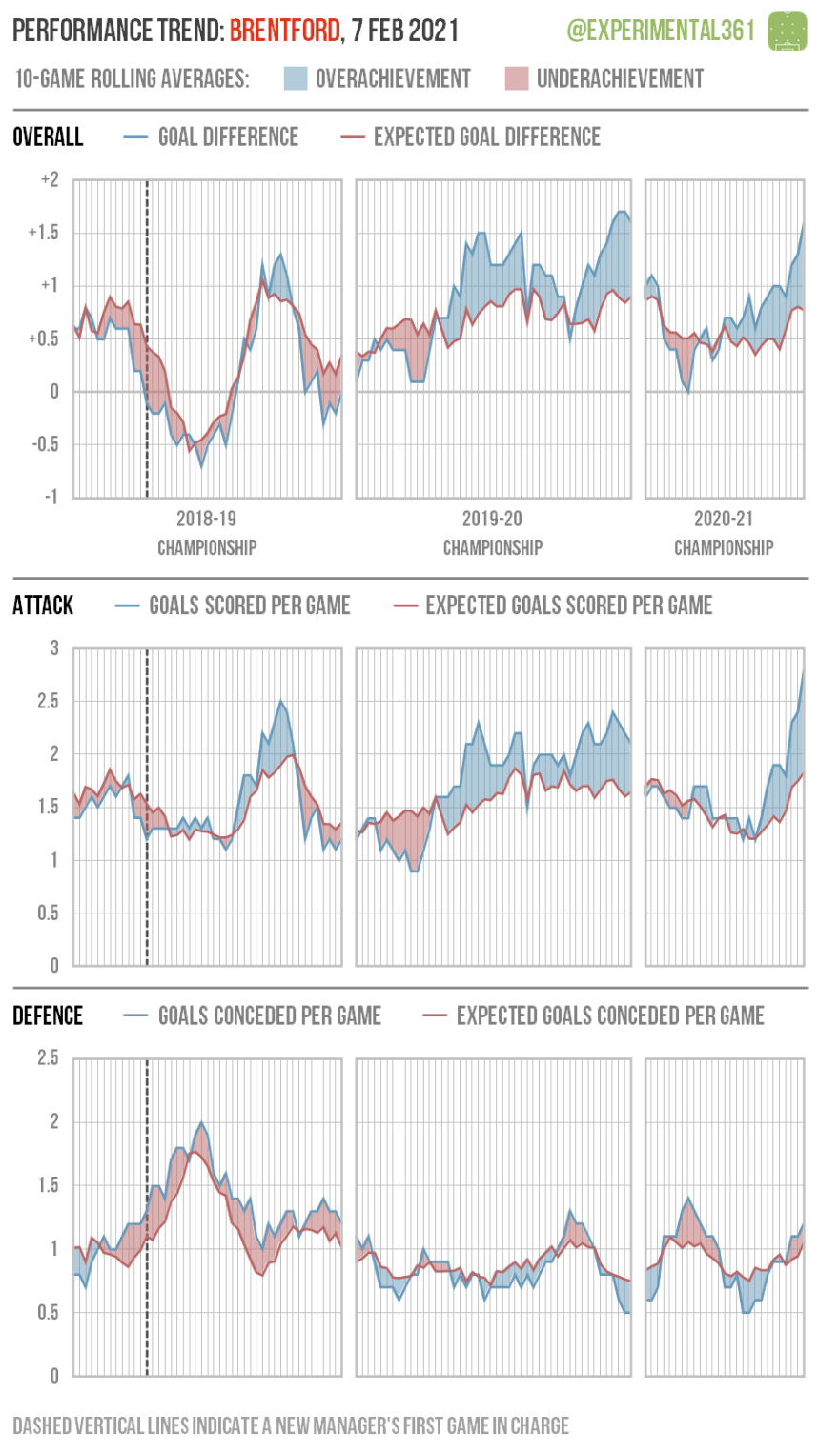 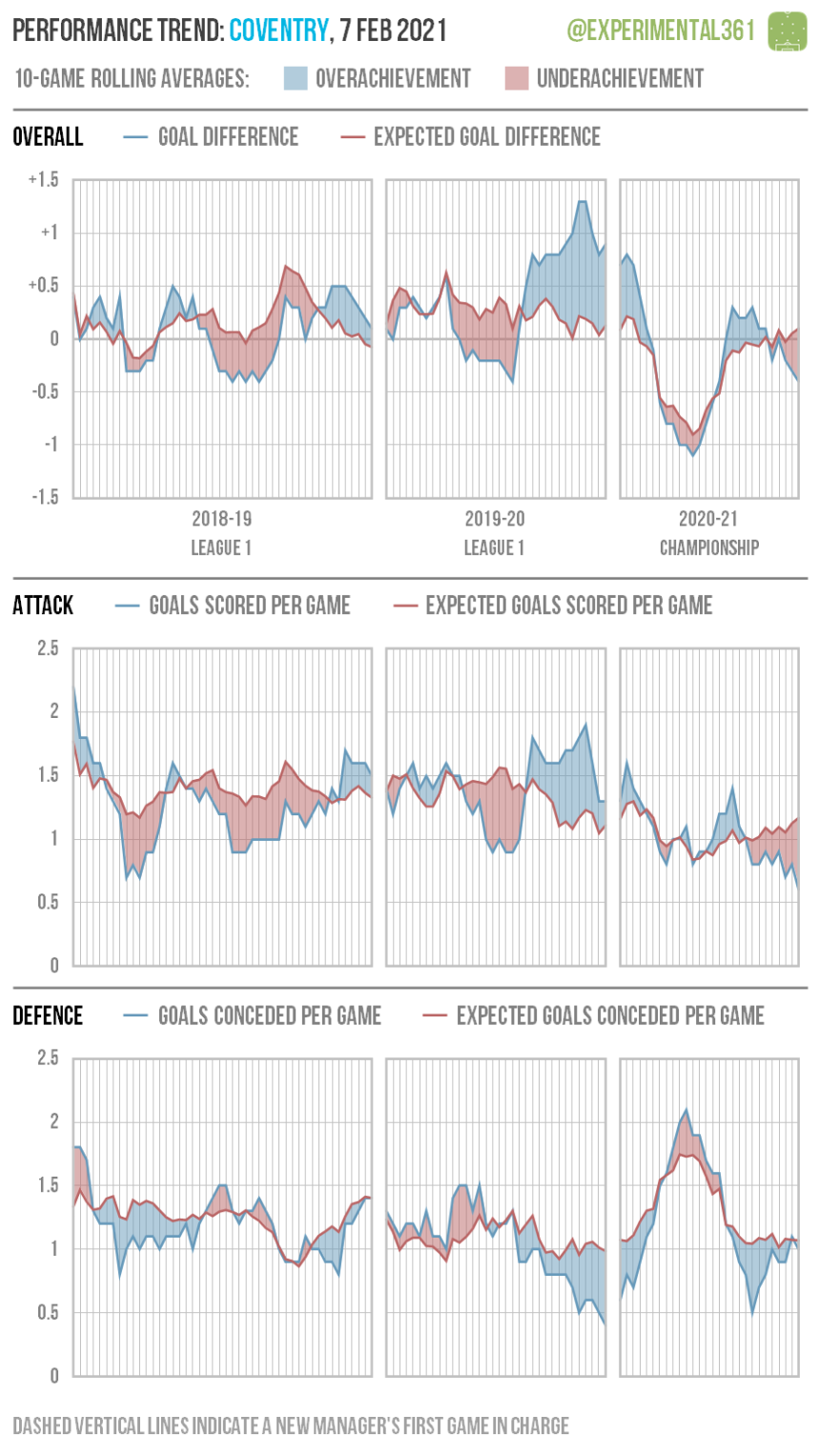 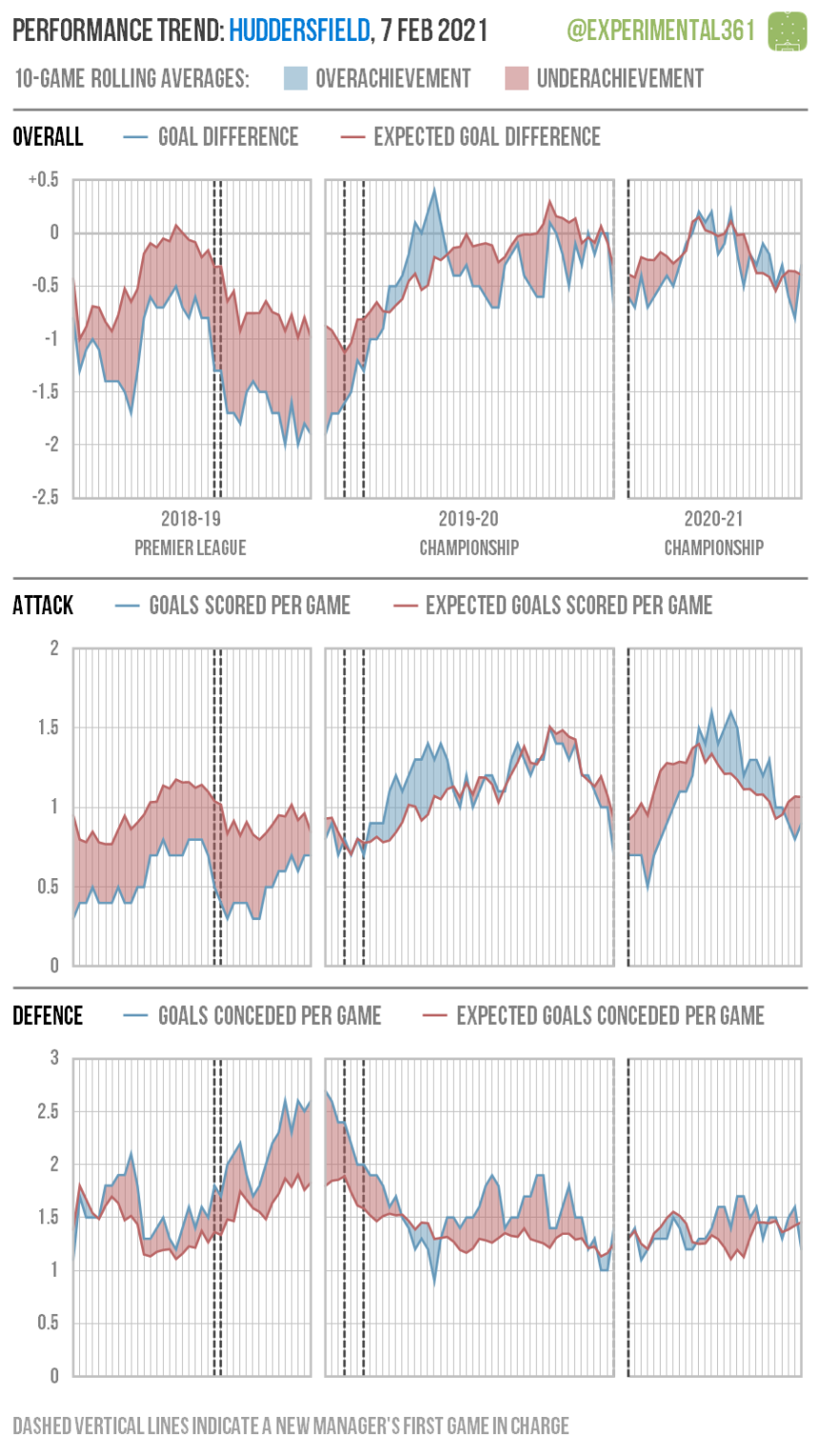 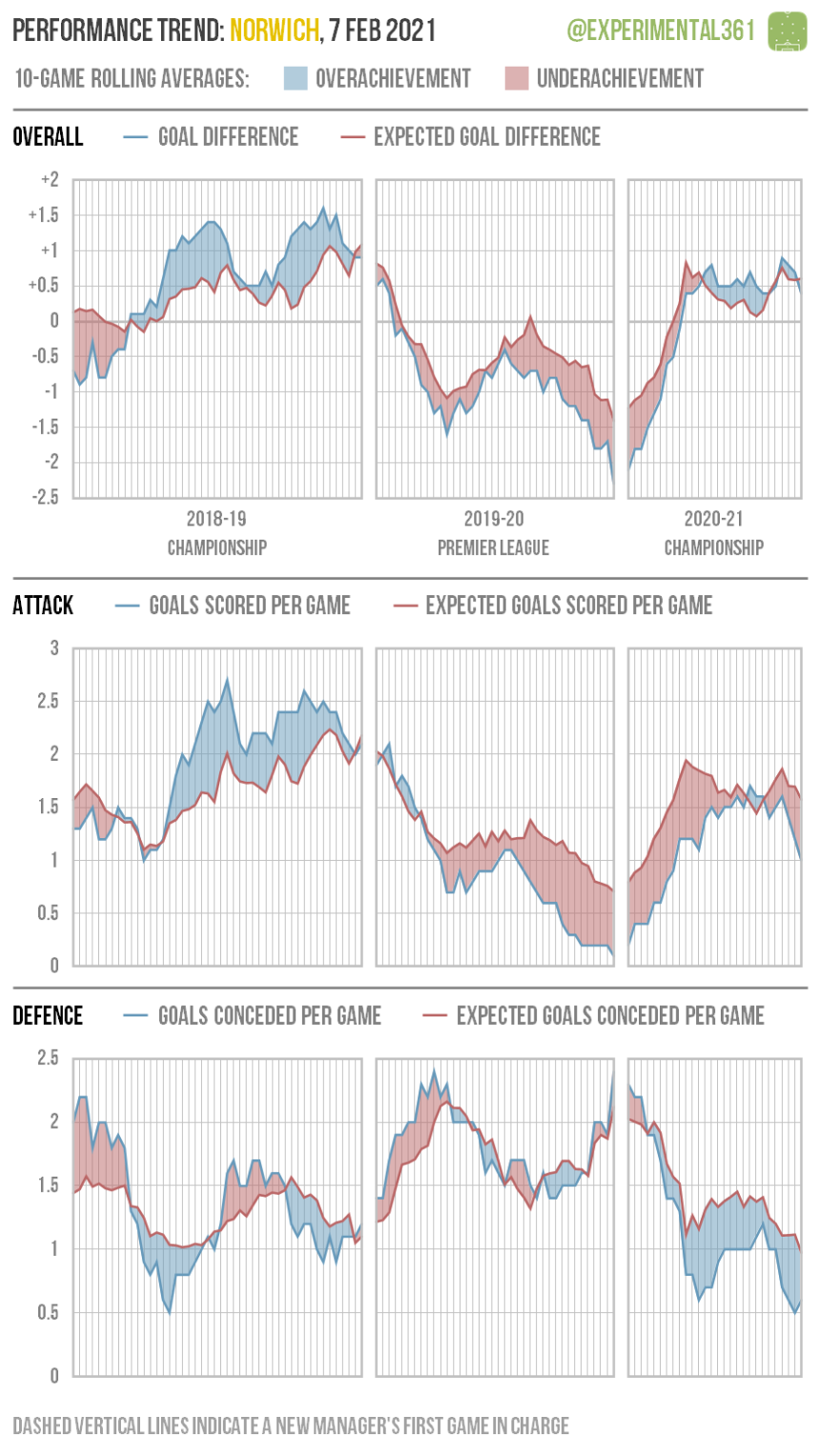 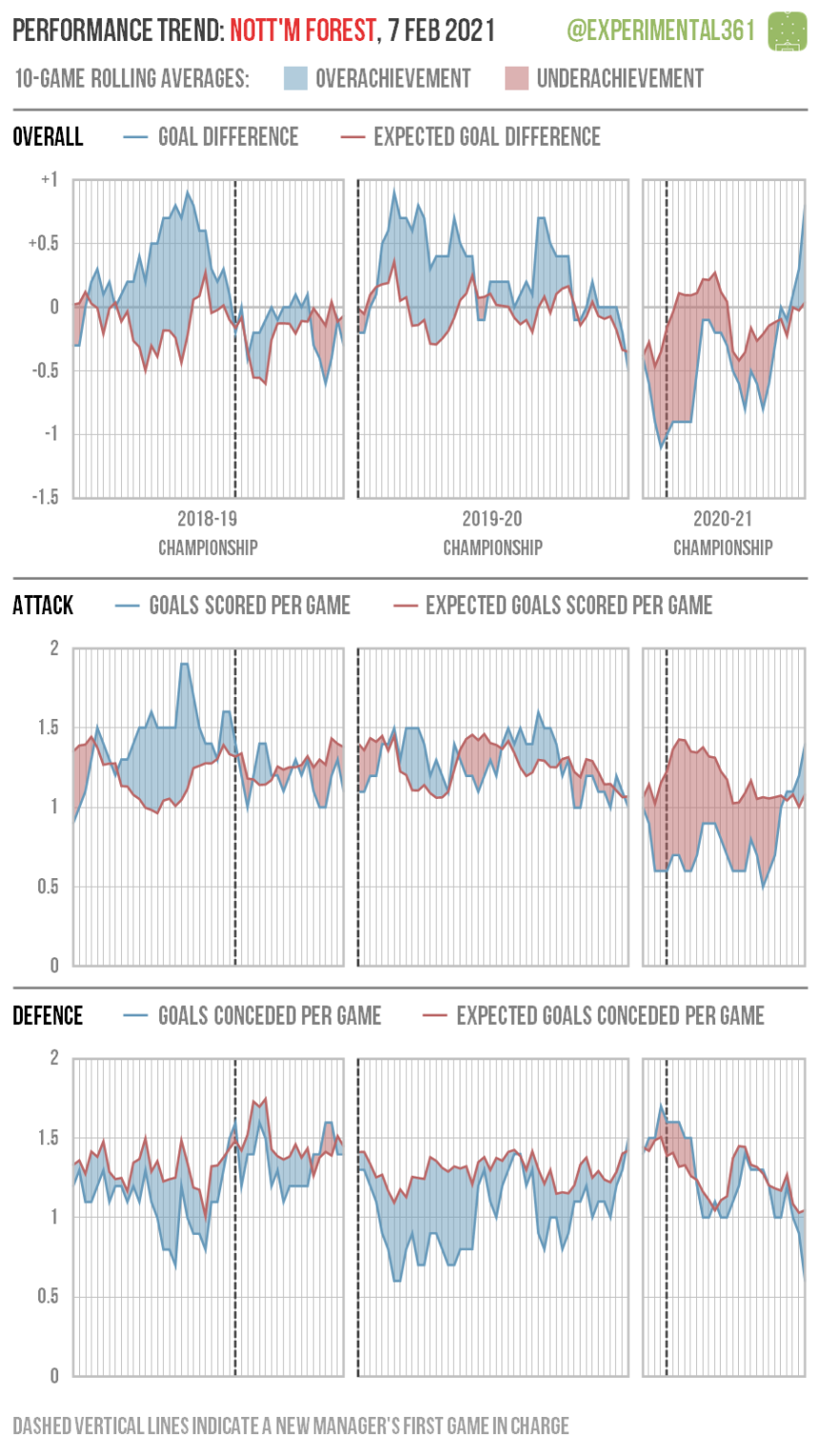 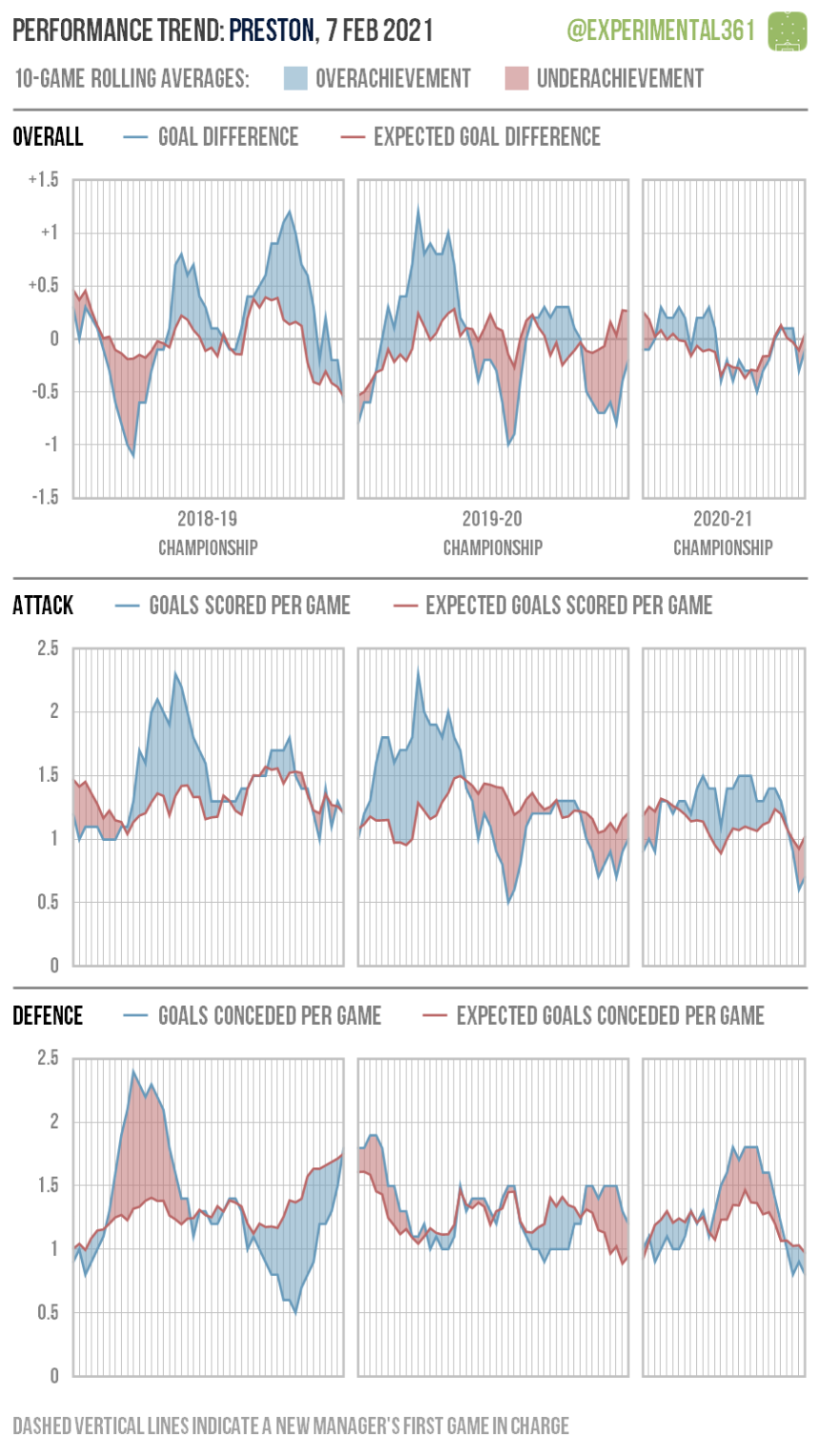 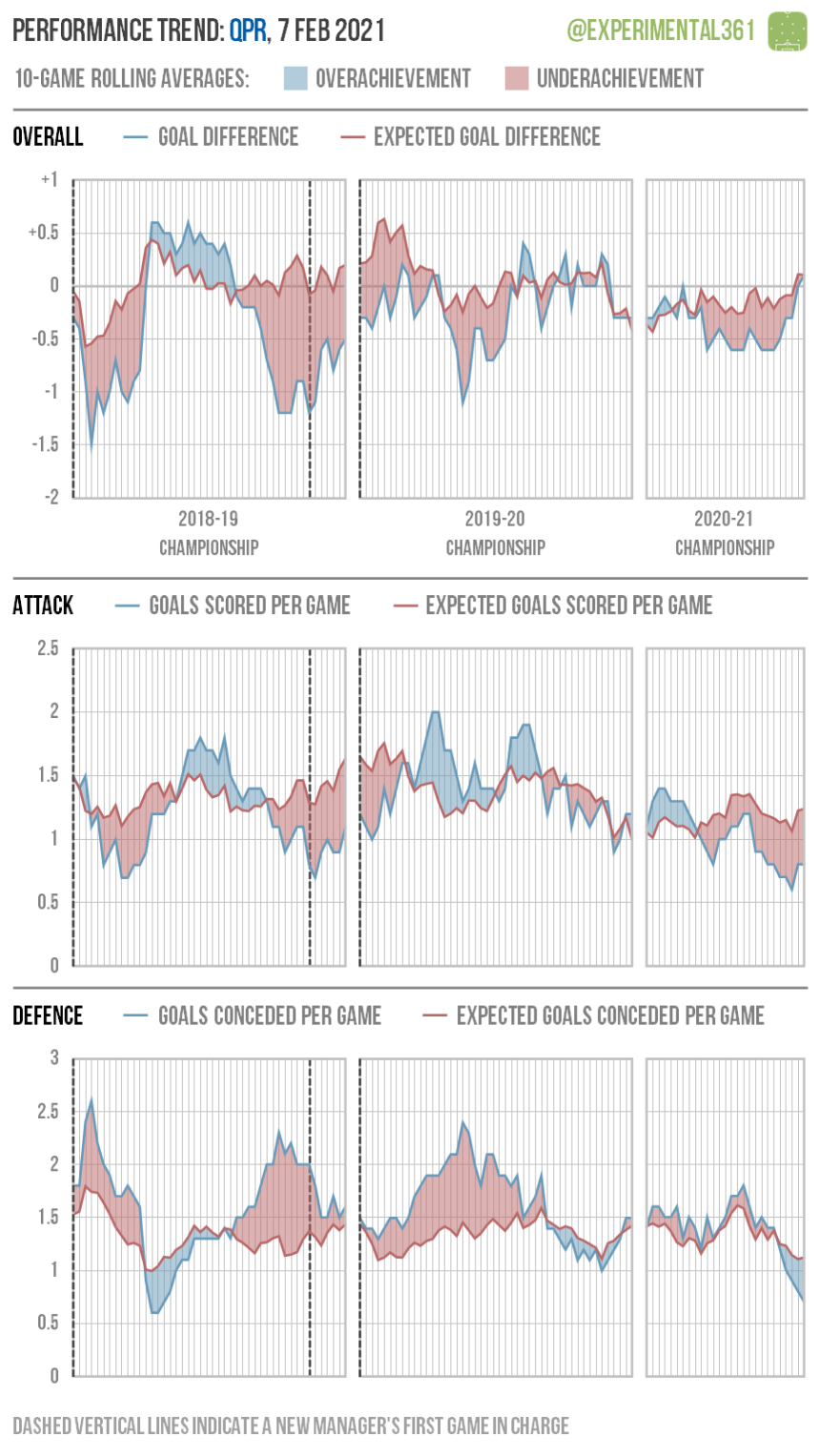 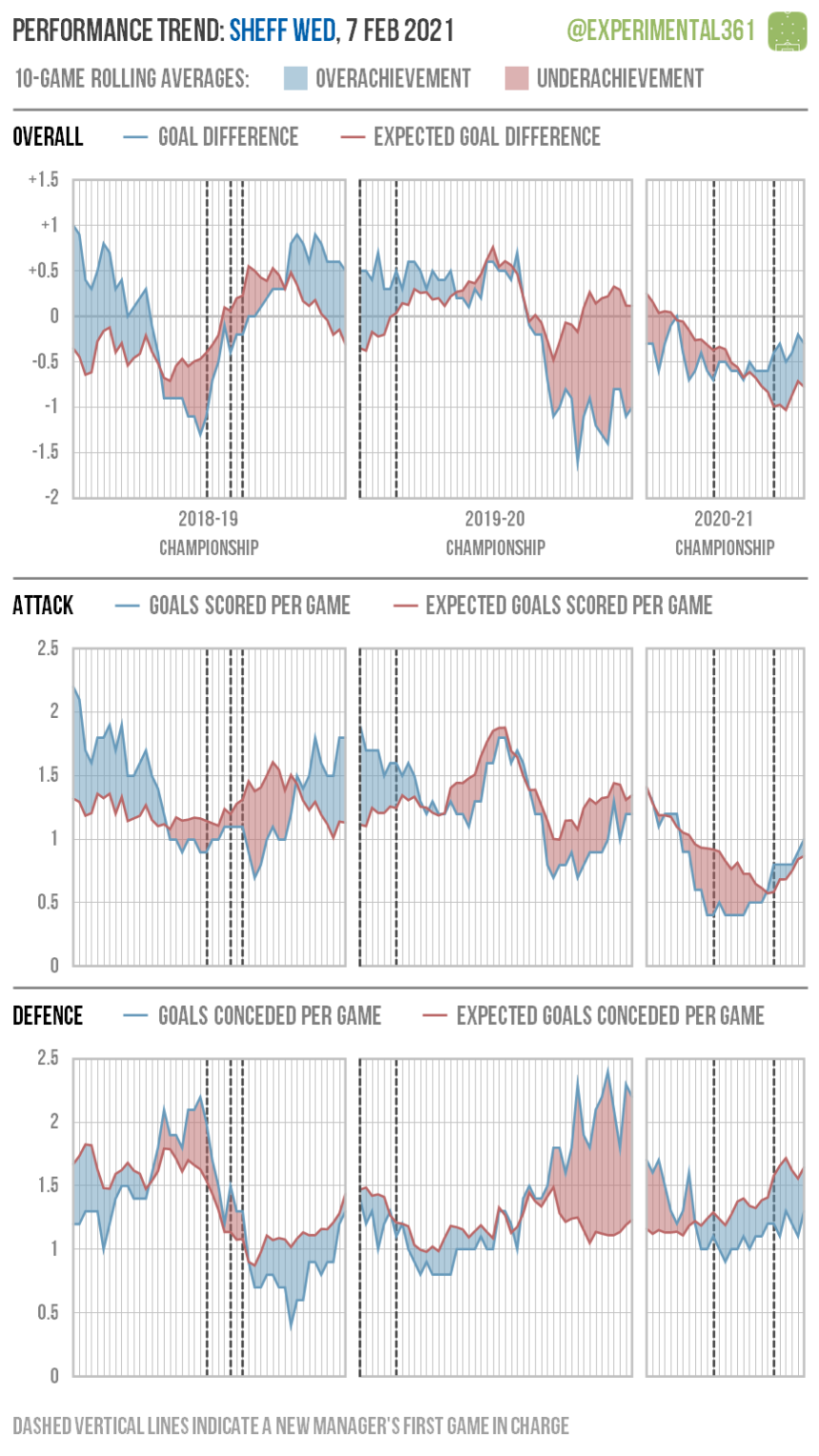 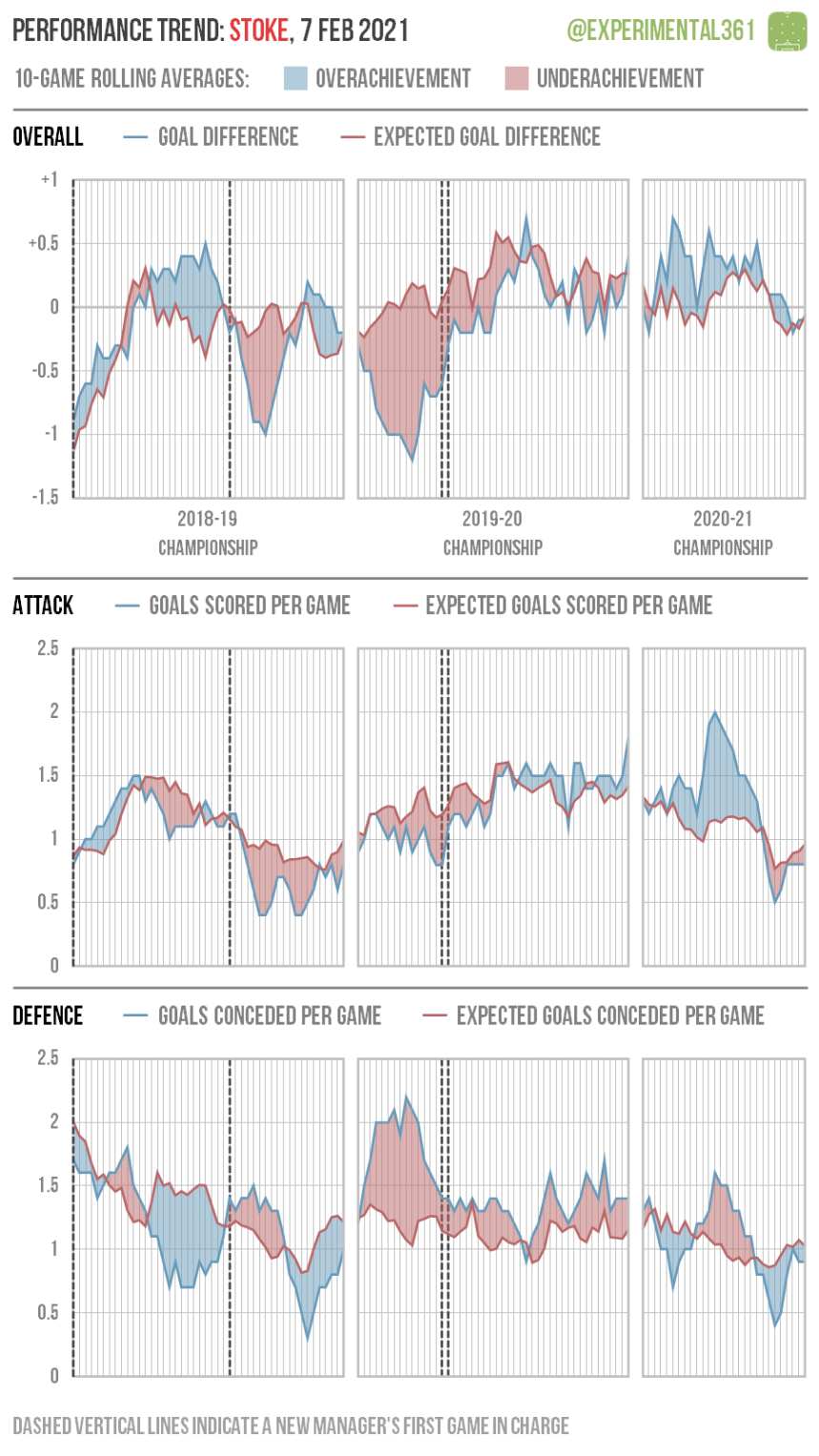