Ahead of the Easter weekend I thought it was a good time to update the scatter graphics for the National League, which compare the attacking and defensive performance of each club. These are explained here if you haven’t seen them before and the previous instalment is here. 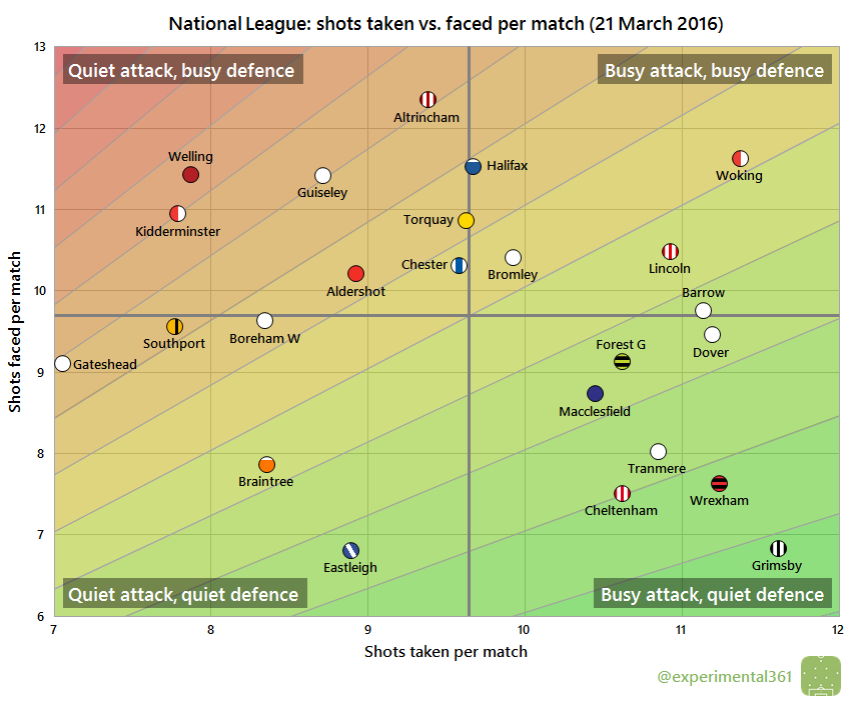 Grimsby remain the division’s most dominant side, having taken more shots than anyone else and allowing fewer than everyone except fellow promotion-chasers Eastleigh.

Woking may create plenty of chances but only struggling Altrincham have allowed more, so it looks as though they’ve been leaving themselves open at the back. At the opposite end of the spectrum, Braintree permit few shots at their goal but that solidity has come at the cost of a cutting edge up front.

Gateshead are comfortably inside the top half despite taking fewer shots than anyone else – the reason for this will become less mysterious in the next graphic.

The two clubs adrift at the bottom – Kidderminster and Welling – have perhaps unsurprisingly created among the fewest chances and allowed plenty.

Again we have Grimsby in the bottom right: not only do they take the most shots but they’re among the more efficient finishers.

Two of the newly-promoted sides have performed interestingly up front: Bromley are also in this quadrant thanks to their clinical shooting while in the top right Barrow have created an impressive number of chances this season, although unfortunately they have been relatively wasteful.

I mentioned Gateshead above as doing well despite taking fewer shots than anyone else, and we can see here that they are the sharpest finishers in the division (down in the bottom left corner).

Welling and Boreham Wood look cut adrift in the top left, having created few chances while also being the most wasteful finishers by quite some distance: it’s taken them roughly twice as many attempts to score each goal on average than the division’s most clinical sides. 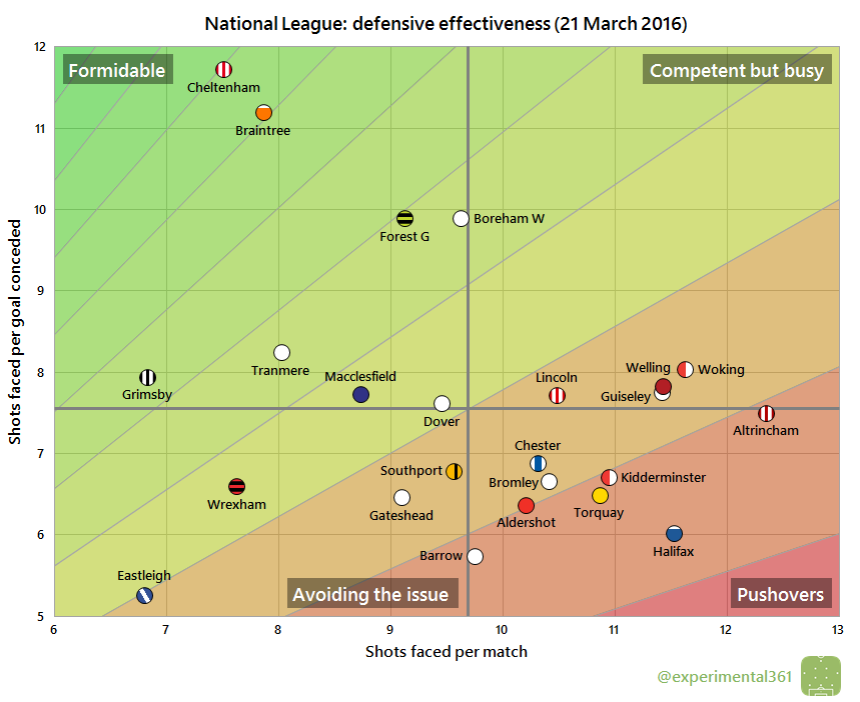 Leaders Cheltenham and play-off chasing Braintree stand out here: they have been impressively resilient at the back, soaking up over three more shots for each goal conceded than the average club.

Meanwhile, despite allowing even fewer shots than the Robins, Eastleigh have conceded very readily from those their opponents are able to take: it’s taken fewer than half as many attempts to breach them on average.

Another newly-promoted side impresses here: they may have struggled up front but Boreham Wood have looked as resilient as promotion challengers Forest Green at the back.

While Altrincham have allowed the most shots by far, they’ve been relatively average at keeping them out. The likes of Halifax have been far more vulnerable from a smaller (although still above average) number of shots faced.

Grimsby are once again lodged in the bottom right corner: when shots are corrected for quality they stand out as the division’s best all-round performers this season.

While Woking create almost as many chances as the Mariners, they look much more normal here. This suggests that many of those shots are speculative ones from poor positions (something similar happens when you look at Reading in the Championship).

Eastleigh and Braintree owe far more to their defences than their attacks for their participation in the play-off race, while newly-promoted Bromley and Barrow could be looking even more comfortable in mid-table if their defenders had performed as well as the players further forward.

Altrincham are currently sitting just outside the relegation zone and the sheer volume of chances they allow – far more than anyone else – is a real concern. At around 1.9 goals’ worth of shots per game, this is more than double what the best-performing defences of Wrexham and Grimsby have permitted.