With the majority of EFL clubs now having played 10 matches this season, it’s time to switch the scatter graphics back on in full. These compare the attacking and defensive performances of every team in a division. Each of the four graphics is explained briefly below and at length here.

Barnsley continue to stand out as the most dominant side in the division, particularly in attack where they’re having three more shots per match than anyone else. Luton and Southend look capable of rising above their current mid-table position with some very healthy numbers here. Peterborough are in a very confusing position, but the fourth chart below will help to make some sense of this.

Bradford’s struggles have an obvious cause: they’re not creating much and aren’t making good use of the chances that do fall their way. Peterborough have been the most ruthless finishers in the division, taking fewer shots than bottom side Plymouth but needing around five times fewer attempts to find the net on average – I’d expect this to cool off a bit unless something unusual is going on in their attack. 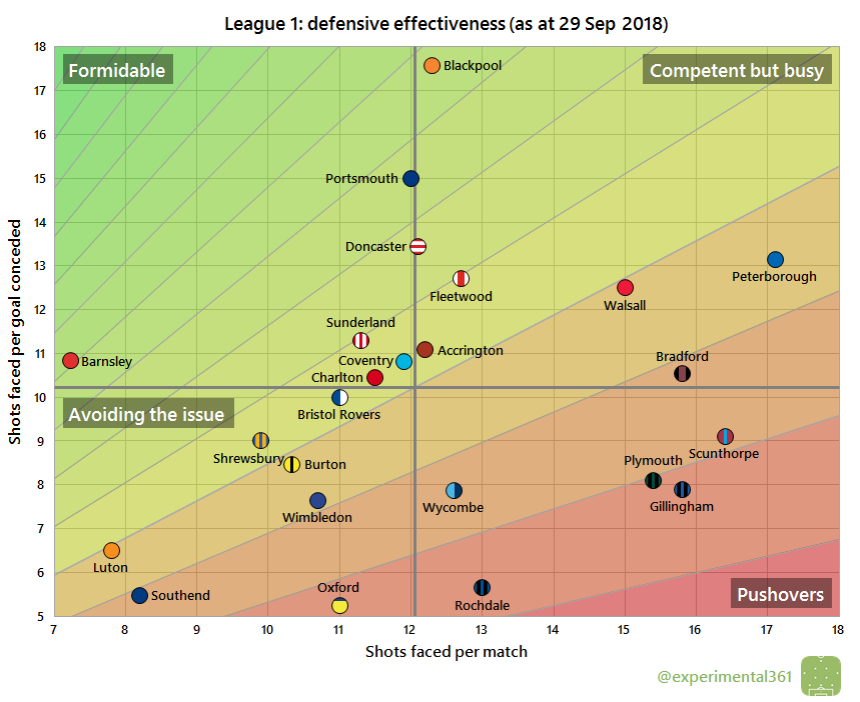 While both Luton and Southend are allowing impressively few attempts at their goal, the ones that do get through have been disproportionately likely to end up in their net. Oxford and Rochdale have also looked pretty leaky, while Blackpool have proven incredibly tough to break down. Peterborough and Walsall have allowed plenty of chances but both have kept themselves competitive by soaking up a lot of that pressure.

When we adjust for chance quality, Barnsley are still the standout team by some distance, so if they keep this up then anything less than automatic promotion would be a huge missed opportunity. Compared to the first chart, Peterborough have scuttled into their traditional top right quadrant, suggesting that a high proportion of the chances they create are from good goalscoring positions. Fleetwood look as though they need a bit more guile up front, and an honourable mention has to go to Accrington who have adapted impressively well to life in the third tier.