Out of curiosity, I’ve applied the official Premier League scoring system (which can be found here under Rules > Scoring) to each of the three EFL divisions to see what the best possible squad would be. Just like the official game, I’ve picked the best-scoring combination of two goalkeepers, five defenders, five midfielders and three forwards (hopefully without putting anyone into the wrong category), although if this were a real game you probably wouldn’t be able to afford to put all of them in the same team.

The only element of the scoring which I haven’t been able to apply is the bonus points, as these include stuff like tackles and passes for which there isn’t data available (at least to me). Also I think the FPL rules are a bit more generous around assists, but overall I think it gives a reasonably accurate impression of what would happen if they rolled it out across the EFL.

For each division I’ve laid out the top players on a pitch, in a style reminiscent of the official Premier League version. 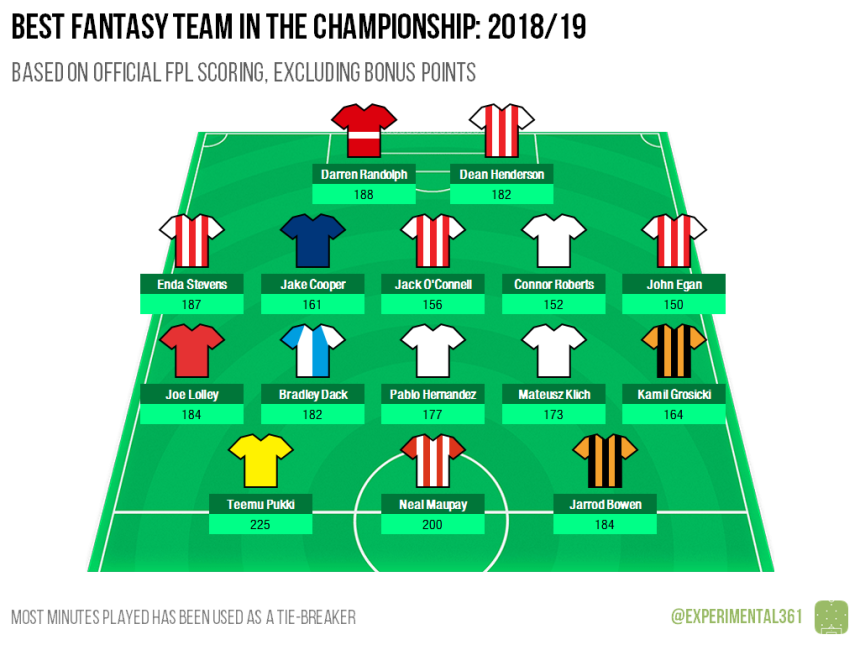 Perhaps unsurprisingly, Norwich‘s Teemu Pukki – the division’s top goalscorer with 29 goals and a further 9 assists – racked up the most fantasy points, although he’s the only member of the champions’ squad who makes the cut. There are a total of four players from runners-up Sheffield United in the list and all are defensive: goalkeeper Dean Henderson and three of their back line. Leeds (two midfielders) and Hull (a midfielder and a striker) are the only other clubs with more than one representative. The Tigers’ Jarrod Bowen makes the cut over some slightly more prolific players (such as Villa’s Tammy Abraham) due to being an ever-present this season (and therefore getting enough appearance points to edge past his rivals). 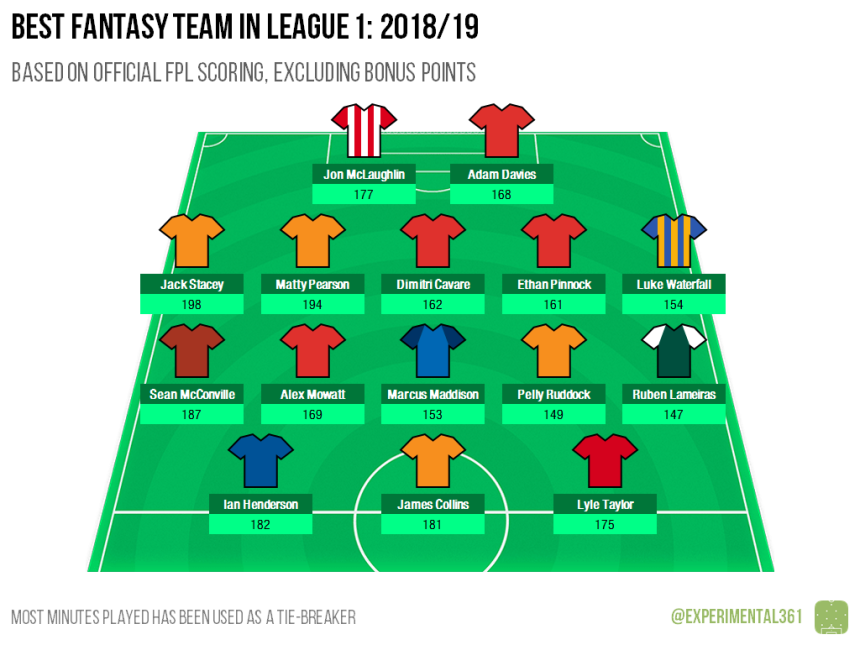 The team here is dominated by the sides who secured automatic promotion – Luton and Barnsley have five and four representatives respectively, with Hatters’ right back Jack Stacey the top-scoring player of all thanks to plenty of goal contributions to go along with all their clean sheets. Nobody else has more than one player, but it’s interesting to see that the midfield contains a player from a relegated side – Ruben Lameiras of Plymouth – and the top-scoring midfielder is from Accrington who flirted with the drop (although having said that, over half the clubs in the division did at some point). The best-performing forward – Ian Henderson of Rochdale – also had a brush with relegation and scrapes ahead of the division’s top goalscorer James Collins by virtue of three more assists, a slightly better disciplinary and appearance record, plus Collins missing two penalties.

Strangely there is only one player from any of the three sides to have secured automatic promotion: Bury‘s Jay O’Shea. Were the most successful teams those who had more squad depth to call upon? The play-offs however will be packed with 10 of the players listed above: four from Mansfield, three from Newport, two from Tranmere and one from Forest Green. The top-scoring player of all was plying his trade in the National League last season: James Norwood banged in 29 goals (and got a solitary assist) to comfortably finish as the division’s top goalscorer. Frustratingly for Colchester they missed out on the play-offs by a point and managed to get two players into the team, including the best-performing midfielder Sammie Szmodics who fired in 14 goals to go along with all the assist and clean sheet points.