As we’re roughly at the halfway stage of the season, it feels worth updating the scatter graphics. These compare the attacking and defensive performances of every team in a division – each of the four graphics is explained briefly below and at length here.

Leeds continue to set the standard at both ends of the pitch, with the most shots taken and the fewest faced. Brentford are their closest challengers and Sheffield Wednesday are also looking pretty dominant overall. Charlton and Luton have found the return to this level tough going, as have Huddersfield (more surprisingly seeing as they arrived from the opposite direction). 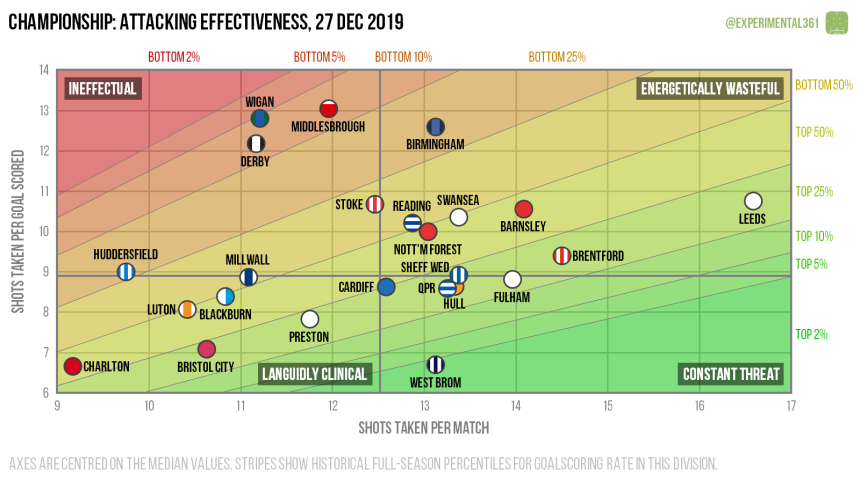 Here we can see why Leeds aren’t running away with the title: for all that shooting they’ve struggled to find the net regularly. Leaders West Brom have taken over three fewer shots per match but have 10 more goals to their name thanks to one of the most ruthless attacks in the division. Both Charlton and Bristol City can thank their clinical forwards for converting a below-average number of chances into an above-average number of goals.

While the Leeds attack has some questions to answer, there’s no arguing with that defensive performance: not only the fewest shots allowed but also the most faced per goal conceded. Nottingham Forest are almost as resilient despite allowing opponents far more opportunities. Stoke, QPR and Barnsley meanwhile have all been let down by leaky defences despite doing good job of restricting the number of chances their opponents get. 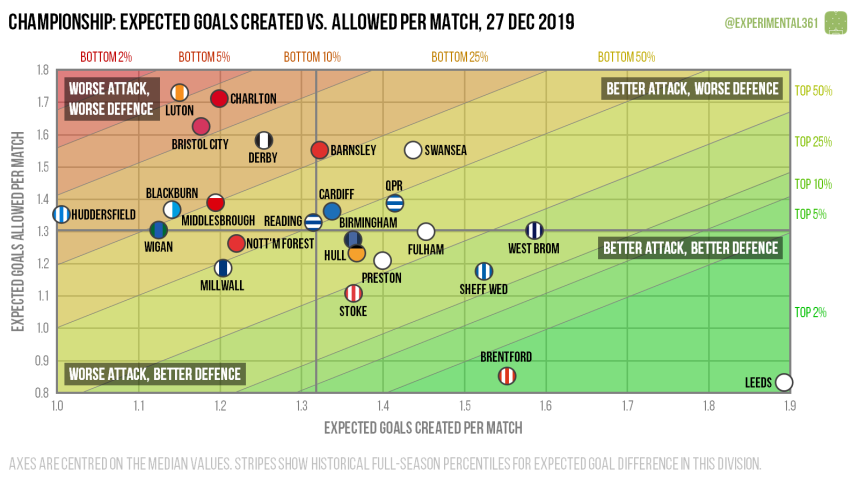 When we adjust for shot quality, it’s still Leeds who are out in front: nobody cones close in attacking terms but Brentford look almost as robust at the back. Sheffield Wednesday look pretty good at both ends of the pitch and it’s no surprise to see Stoke gradually climbing the table given their decent underlying performances. Huddersfield’s attack is still far too quiet so perhaps they’ll be looking for reinforcements in January.